The mechanism of anti-aging of fermented jujube (Zizyphus jujuba fruits (ZJF)) was investigated using transgenic daf-16 and mev-1 strains of C. elegans. Jujube extracts fermented for 7 days (F7-ZJF) and 14 days (F14-ZJF) with Laetiporus sulphureus were treated to a NGM agar plate with 10-15 transgenic daf-16 and mev-1 strains of the synchronized age. There was no difference of lifespan between the drug-treated group (7-day fermented ex. (F7-zjf-200 ㎍/mL), 14-day fermented ex. (F14-zjf-200 ㎍/mL)) and the non-treatment group in both daf-16 and mev-1 strains. In the thermal stress experiment, F7-zjf-200 ㎍/mL showed a significant (t = 4.017) activity in thermal stress resistance with a 12% higher survival rate than the control group. In the survival test in H2O2, F7-zjf-200 ㎍/mL and F14-zjf-100 ㎍/mL have significant activity in oxidative stress resistance compared to the control group. This study indicates that life span expand of N2 strain of the jujube extract is related to the regulation of daf-16 and inhibition of mev-1 signal in C. elegans.

Aging induces physiological changes in all systems in the body. It is known that balance function, spontaneity, and oxygen intake according to aging are reduced by about 20-60% compared to when health is at its peak (Shephard, 2009). In addition, with aging, the content of chondroitin sulfate in the bone joints and the glomerular filtration rate (GFR) of the kidneys decrease (Ishimaru et al., 2014) (Weinstein and Anderson, 2010), (Nakamura et al., 2002). Also bifidobacterium of the intestinal flora is reduced by aging (Perez Martinez et al., 2014). Experimental animals such as Drosophila or Caenorhabditis elegans are widely used for anti-aging research. The Insulin/IGF-1 (IIS) signaling pathway is known to play an important role in the regulation of aging in C. elegans. When insulin or insulin-like substances bind to daf-2 dimer, a type of IGF-1 receptor, it induces stress resistance and phosphorylation of daf-16 (FoxO transcription factor), an anti-aging factor. In this process, the nuclear translocation of daf-16 is disturbed, and therefore aging is promoted by reduction of stress resistance and oxidative damage (Cohen and Dillin, 2008). Daf-16 is known to reduce toxicity by producing low-toxic high-molecular-mass by regulating active aggregation of toxic oligomers in the nervous system (Hsu et al., 2003). Thus, the regulation of daf-16 could be a major target of aging control.

In recent years, C. elegans anti-aging research using natural products have been reported such as stress resistance of orange extract (Wang et al., 2020a), antioxidant of Jatu-Phala-Tiga, a Thai traditional drug prescription (Wetchakul et al., 2019). Neuroprotective and longevity effects of Streblus asper leaves (Prasansuklab et al., 2017), inhibitory activity of acethylcholine esterase of C. elegans CL4176 strain of alkaloids isolated from Seoksan (石蒜, Scientific name: Lycoris radiata) (Xin et al., 2013), and the life extension effect of antlers (Wang et al., 2020b) have been reported on anti-aging journals. The author has studied the life-span extension effect of C. elegans using Simjeondaebo-tang and cinnamon (Yu et al., 2010). As a previous study, the anti-aging effect of fermented jujube was reported (Ji et al, 2014). In the previous study, it was observed that the extract of jujube fermented for 7 days and 14 days with a strain of Laetiporus sulphureus CS0218 (KFCC 11494P) had a significant effect on extending the lifespan of the C. elegans N2 strain. In this study, the transgenic daf-16 strain and mev-1 strain were used to elucidate the mechanism of life-span effect of fermented jujube. And we were conducted the thermos-resistance test and antioxidant test of fermented jujube.

For the preparation of jujube fermentation solution, 100 g of jujube powder was added to 1L of purified water, and Laetiporus sulphureus CS0218 (KFCC 11494P) strain was added to the culture solution and cultured while maintaining at 37℃ and pH 5-7 using a 5 L fermentation tank. The culture broth was removed by centrifugation, and the fermented product was filtered to make a final 70% (V/V) ethanol aqueous solution, evaporated at 50℃ (Eyela, Japan), and freeze-dried. Vourcher specimens of jujube (NBU-HP-S-016) are kept at the Department of Emergency Medical Rescue at Nambu University.

Lifespan of transgenic daf-16 and mev-1

Transgenic daf-16 strain and mev-1 strain (Caenorhabditis Genetics Center, University of Minnesota, Minneapolis, MN, USA) were provided by Professor Jo Jung-Hoon of Chosun University and used in the experiment. In previous studies (Ji et al., 2014), the authors have confirmed the lifespan effect of fermented jujube through the N2 strain, and this study was conducted to find out which mechanism is involved in aging. According to the method of Brenner (Brenner, 1974), a lawn was made with the OP50 strain on a Nematode Growth Medium (NGM), and C. elegans was transferred to a new NGM agar plate every 3-4 days and cultured thereon. To obtain nematodes of same age, about 100 nematodes from Syncronized L1 stage were transferred to NGM agar plate and incubated for 72 hours to become L4 stage Lavae. Ten adult worms were transferred to a 6cm plate treated with drugs and control plate, followed by egg laying for about 3 hours, and the adult worm was removed from the plate. After 72 hours, the adult worm was transferred to a new plate and the dead worm was counted. During the reproductive period, nematodes were transferred to a new NGM agar plate treated with the drug every day, and then transferred to a new NGM agar plate every 3 days, and the survival rate was measured. The survival of nematodes was assessed as being dead if there was no reaction by careful contact with platinum wire. The experiment was conducted at 20℃ which is the normal growth condition and 25℃ which is the thermal stress growth condition. Control group (drug-free group), jujube extract group (ZJF-200 ㎍/mL), jujube extract group fermented on 7 days (F7-ZJF-200 ㎍/mL), jujube extract group fermented on 14 days (F14-ZJF -200 ㎍/mL) was divided and conducted twice for each experiment.

For statistical treatment, the difference between the drug-treated group and the control group was confirmed by the Chi-square test by performing a log-rank test. SPSS 20.0 and prism 5.2 were used for statistical analysis.

Jujube (Zizyphus jujube) is known to have the effect of neuroprotection and hematopoietic (Bensky et al., 2004). Boeun (Chungcheongbuk-do) jujube is known to have a large fruit, a lot of flesh, and a high sugar content. The reasons for the excellent quality are the clean natural environment of ​​Mt. Songni, abundant sunlight, and a large daily temperature range. In previous studies (Ji et al., 2014), the life-span extension effect of C. elegans was observed for jujubes that were not fermented and jujubes fermented for 7 and 14 days. As a result, in the case of non-fermented jujube extract, no life-prolonging effect was observed, and the jujube extract (F7-ZJF-200 ㎍/mL) on the 7th day of fermentation showed a significant life-prolonging effect. In this study, the mechanism of lifespan of fermented jujube extract in transgenic C. elegans was investigated. 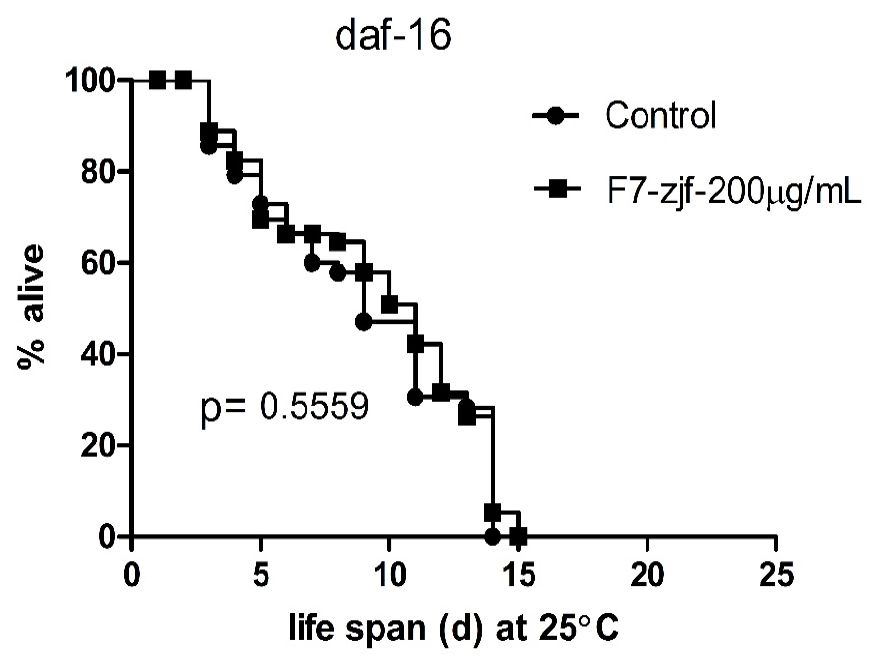 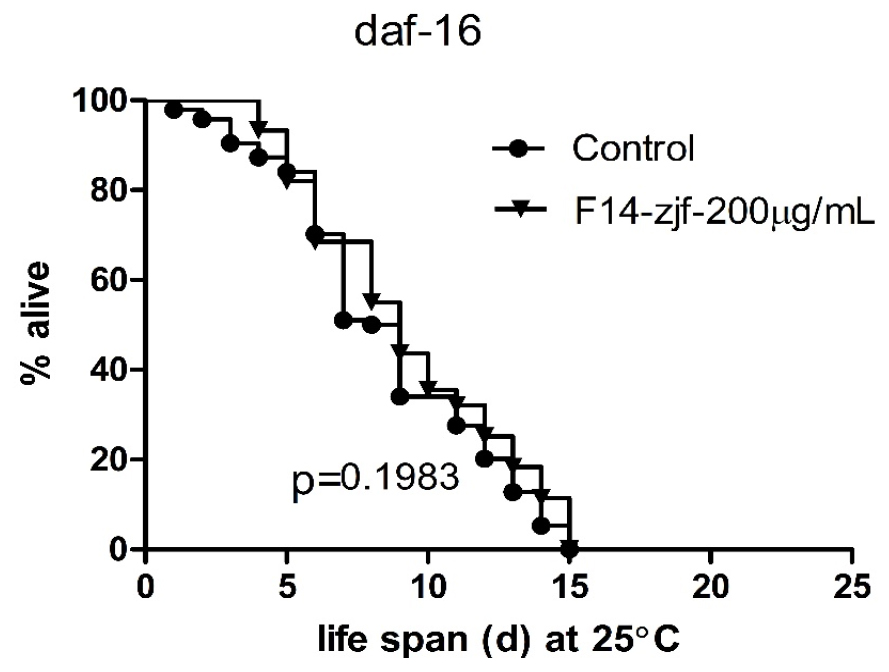 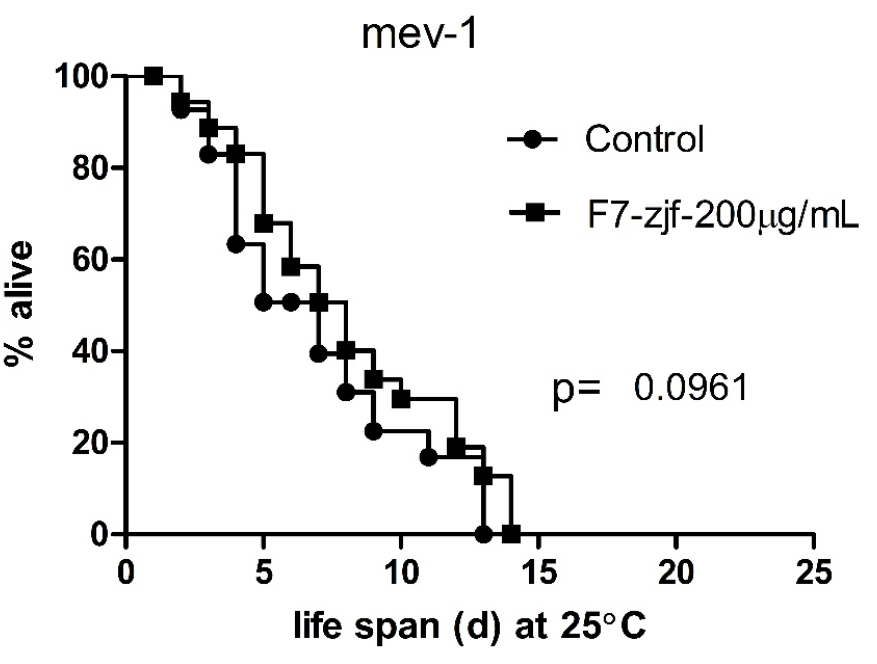 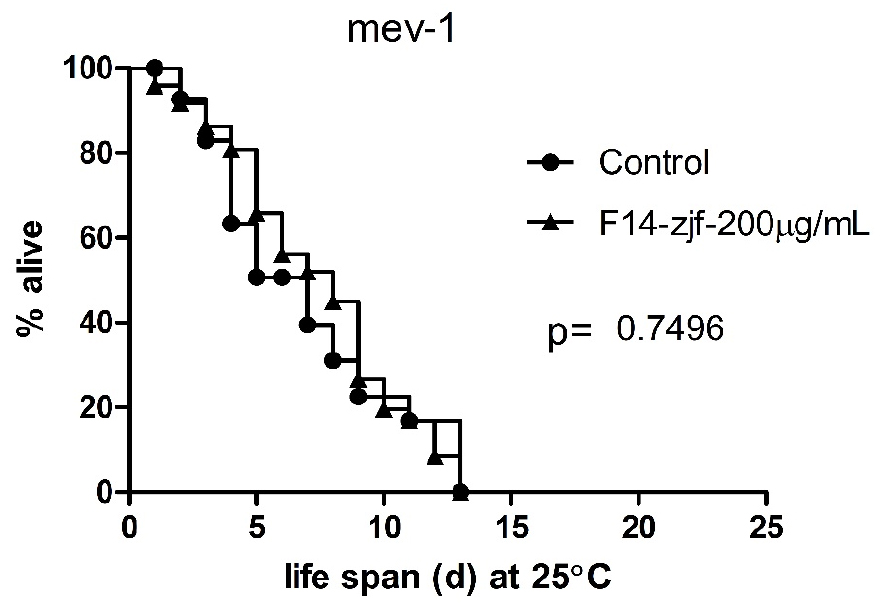 Summary of life span of daf-16, mev-1 strain and resistance of thermal and oxidative stress 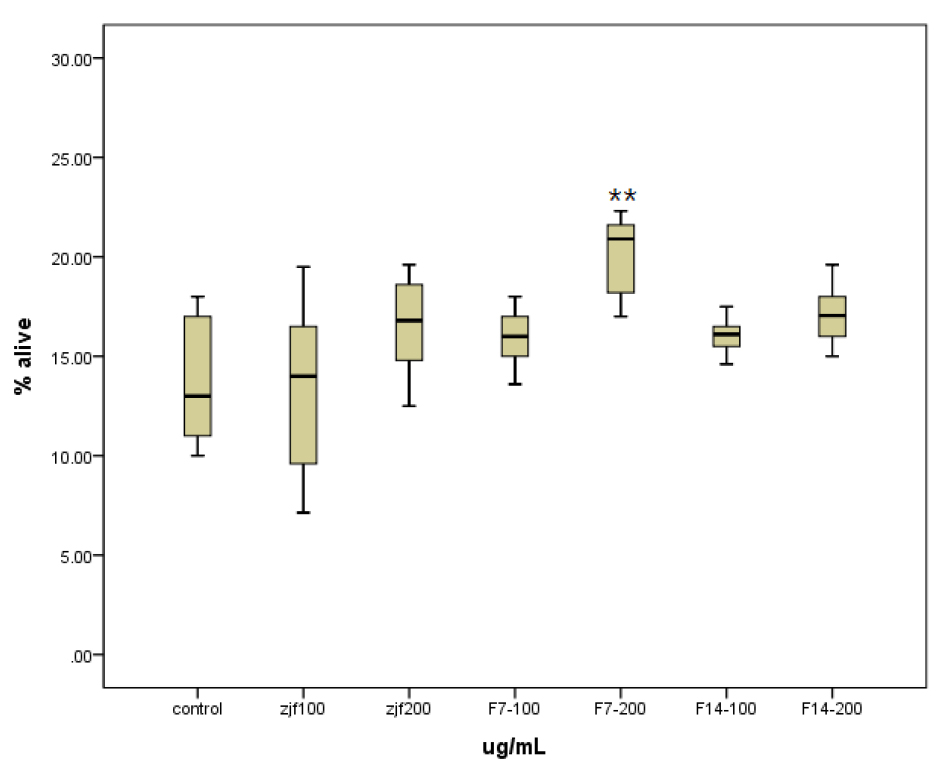 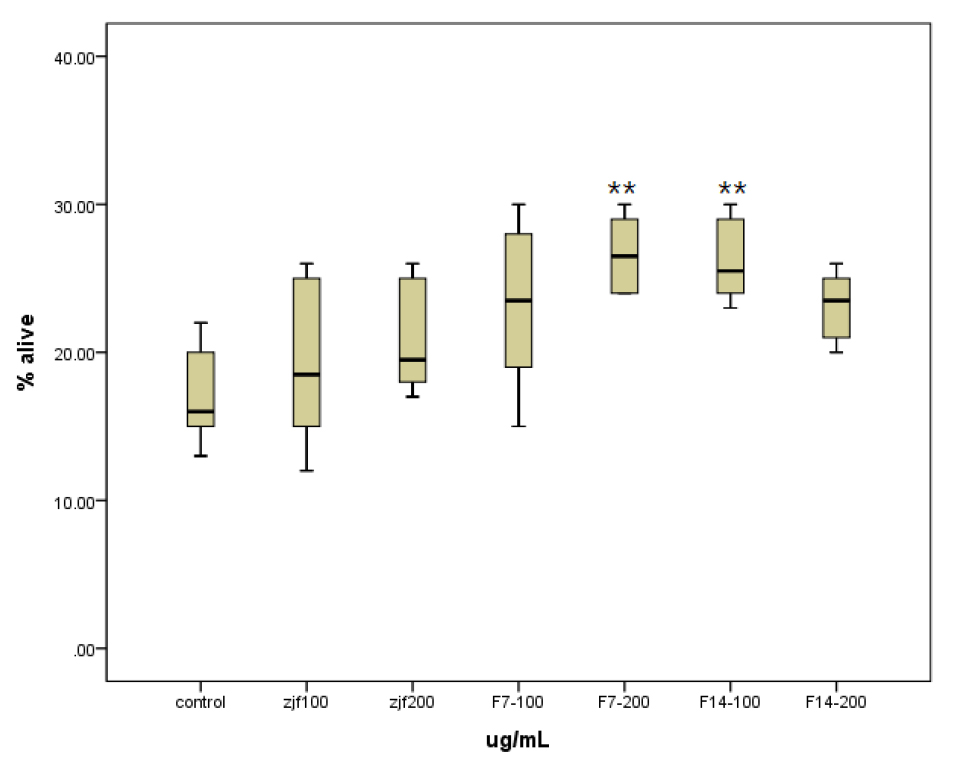 This study were supported by grant from the Small and Medium Business Administration R&D Project, Republic of Korea (S2007992) and research funds from Nambu University (2018).