Growth characters and ingredient contents of two-year-old bellflower (Platycodon grandiflorum) roots were investigated under both control and soil moisture treatment condition using soil moisture control system including soil sensing and automatic water supply chain in this study. Root diameter, fine root number, root length, fresh weight and dry weight of the plant were significantly influenced by the automatic water treatment, 20%, 30%, 40% and 50%, respectively. Ingredient contents of the two-year-old roots in bellflower plants were detected in the 20% and 50% of controlled soil moisture content. Contents of amino acids were decreased by the soil moisture treatment, meanwhile, contents of minerals were not showed significant decrease except for phosphorus content. Showing no difference in proline and tyrosine, fourteen of the amino acid contents were gradually decreased by the increased soil moisture contents, with significant decrease in serine, glycine, alanine, leucine, lysine and histidine at 20% treatment.

The data for the growth characters and components of P. grandiflorum roots by the soil moisture conditions were investigated in this study using an automatic irrigation system that has constructed by our study (Lee et al., 2021).

Seedlings of one-year-old bellflowers (Platycodon grandiflorum) with 5 to 6 leaves were purchased from bellflower plantation (Bellflower Farm, South Korea) and used for cultivation. The one-year-old bellflower seedlings were transplanted to farmland fields which is controlled by the soil moisture control system (AcroTNS Com., South Korea) on May 26th, 2021 (Lee et al., 2021). The soil components used in this experiment were shown by Lee et al. (2021). The farmland was mulched with black vinyl film with 100 ㎝ in width. All agricultural practices, other than the experimental treatments, were done according to the recommendation of the RDA, Korea (Rural Development Administration, 2012).

Soil moisture sensing was executed by the sensors (WT1000B and WT1000A, MiraeSensor Com., South Korea) on the surface of soil with 6 ㎝ to 11.5 ㎝ in depth (Lee et al., 2021). Moreover, EC (Electric conductivity) and soil temperature were also checked. Soil moisture was controlled by 20%, 30%, 40% and 50%, respectively, according to manual of AcroTNS Company (AcroTNS Com., South Korea). Soil moisture was monitored and recorded using moisture sensor plugged into data loggers at 2-min intervals over the entire growth cycle (Lee et al., 2021). Sensors were inserted into the substrate from the top, with sensor prongs close to the center of the ridge (Henderson et al., 2018; Lee et al., 2021).

Measurement of growth and development characteristics of root

Conditions for analyses of minerals by ICP-AES

Constituent amino acids in Platycodon grandifflorum were analyzed by acid hydrolysis method. The sample, 0.2 g to 0.5 g, was thoroughly mixed with 3 ㎖ of 6 N-HCl in a test tube and tightly sealed. The mixture was subjected to acid hydrolysis in a heating block (Thermo-Fisher Scientific Co., Rockford, IL, USA) at 105°C for 22 hr. The hydrolyzed sample, 10 ul, and sodium dilution buffer (pH 2.2), 990 ㎕, were mixed and subsequently filtered through a 0.2 ㎛ PTFE membrane filter. An amino acid analyzer (L-8900, Hitachi High Tech, Tokyo, Japan) was used to determine the profiles of constituent amino acids. The conditions for analyses of amino acids by ICP-AES (L-8900, Hitachi High Tech, Tokyo, Japan) were shown in Table 2.

Conditions for analyses of amino acids by ICP-AES

Condition of soil on cultivation field

Monitoring for the soil moisture content, EC and soil temperature were executed on the base of automatic soil moisture content control system under farmland conditions and the trend of environmental data were reported by Lee et al. (2021, 2022). In addition, the trends of environmental data on farmland were checked after cultivation of plants in the field and shown in Table 3.

Characteristics of soil components of the cultivation field after the plant culture at Sunchon National University (SCNU), South Korea

As shown Fig. 1, additional data for the soil moisture content, EC and soil temperature were measured for 1 month, March, 2022. As a result of monitoring of the soil moisture by using automatic irrigation control system, even though the sensing data were not matched directly, the system was worked properly (Lee et al., 2021; 2022). Thus, we sampled roots for growth and ingredient contents analyses on 20% and 50% moisture content, respectively. 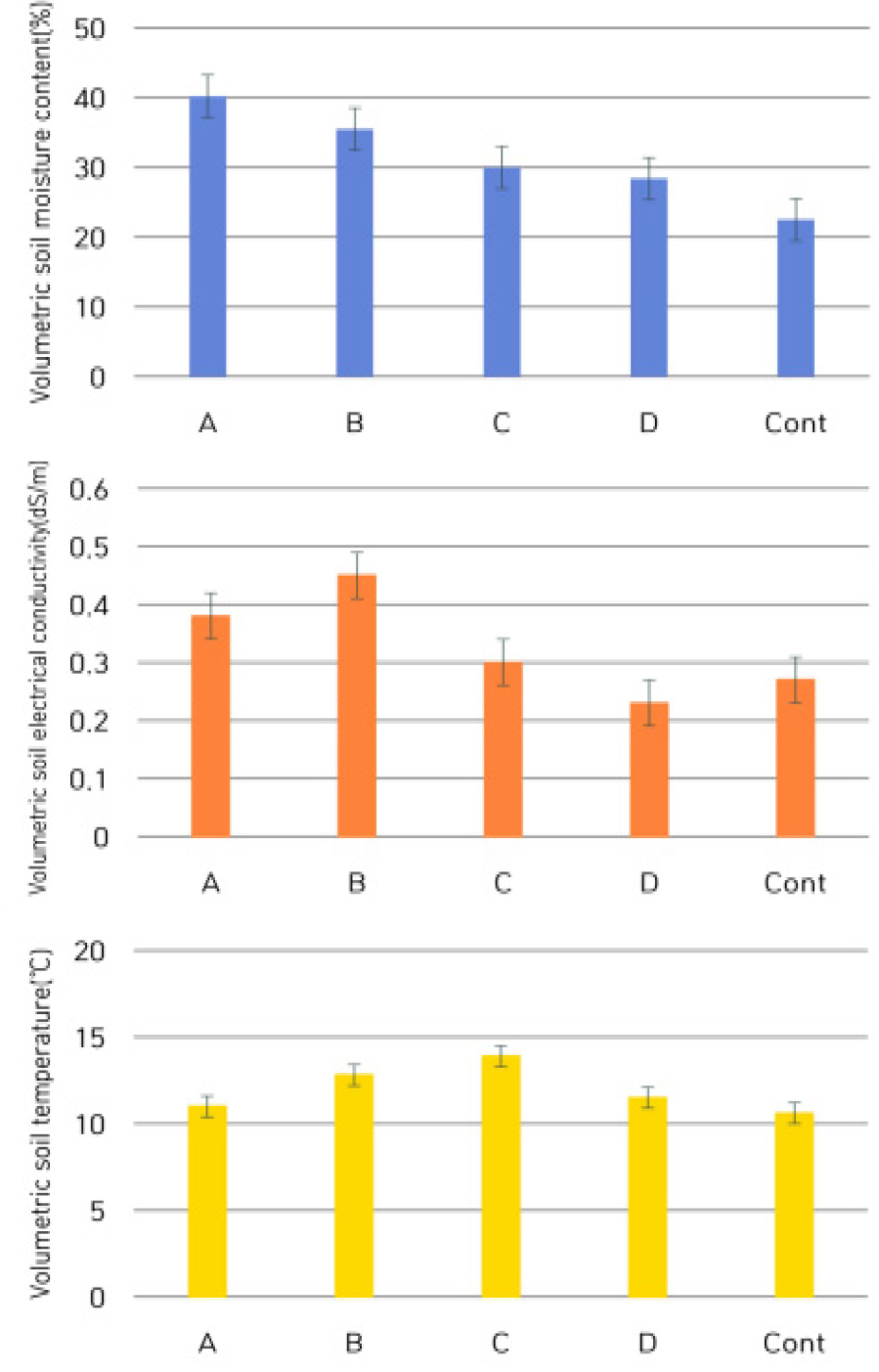 Growth of two-year-old roots by soil moisture contents in bellflower plants were shown in Table 4 and Fig. 2. Root diameter, root number and root length of the plants were significantly influenced by water treatment with 20%, 30%, 40% and 50%, respectively. Moreover, fresh weight and dry weight of the plant roots were significantly influenced by water treatment, 20%, 30%, 40% and 50%, respectively. In detail, main root and fine root diameter, main root and root number have a tendency that showing more increase from 20% to 40% of the water contents compared with control, and those were decreased in 50% of the water content. Especially, fine root numbers were decreased in 50% treatment (Fig. 2). Also, fresh weight, dry weight, shoot fresh weight and shoot dry weight have showing increasing by the water content from 20% to 40% compared with control, and these were decreased in 50% of the water content.

*Means within a line followed by the same letter are not significantly different base on the Duncan’s Multiple Range Test (DMRT, p < 0.05).

Ingredient contents of two-year-old roots in bellflower plants were detected in the 20% and 50% controlled soil moisture content.

*Means within a line followed by the same letter are not significantly different base on the Duncan’s Multiple Range Test (DMRT, p < 0.05).

Chemical composition in bellflower was reported in leaves and stems of (Jeong and Shim, 2006), roots (Lee et al., 2013) and raw ginseng (Kim et al., 2002). The composition was different by genotype (Yan et al., 2013), and cultivation year and soil texture (Lee et al., 2000) of PG, and plant organs and cultivation year of roots in Panax ginseng C,A. Meyer (Park et al., 2012). In addition, it was reported main components contents were different according to grow period in Codonopsis lanceolata (Im et al., 2021). In this study, some of minerals were different by soil moisture contents.

Amino acid contents of two-year-old roots of bellflower plants were shown in Table 6. Showing no difference in proline and tyrosine, all of the amino acid contents were gradually decreased by increased soil moisture contents, with significant decrease in serine, glycine, alanine, leucine, lysine and histidine at 20% treatment.

yMeans within a line followed by the same letter are not significantly different base on the Duncan’s Multiple Range Test (DMRT, p < 0.05).

Under water stress condition in paddy field, the main constituents of essential oil, proline and total carbohydrate content increased, and N, P, K, and protein decreased in ginseng (Khalid, 2006). As a heat shock, roasting induced diverse patterns of amino acid profiles in PG roots (Lee et al., 2020). In this study, water content in soil affected to amino acid patterns, also. Jeong and Shim (2006) reported difference of amino acid contents between leaf and stem in ginseng showing glutamic acid, followed by arginine in leaf, lysine, followed by glutamic acid in stem parts of genseng plant. Moreover, their data shown that the amino acid contents were different from cultivation year, and the contents were high in glutamic acid, followed by arginine in 3-year cultivated roots, and in arginine, followed by alanine in 24-year cultivated roots.

“This research was supported by the MSIT (Ministry of Science and ICT), Korea, under the Grand Information Technology Research Center support program (IITP-2022- 2020-0-01489) supervised by the IITP (Institute for Information & communications Technology Planning & Evaluation)”