Study on the of the Correlation between Soil Chemical Properties and Bioactive Compounds of Acer tegmentosum Maxim.

Acer tegmentosum Maxim, belongs to the Aceraceae family, is a type of deciduous tree that grows in Korea, Russia and northern China (Korea National Arboretum, 2020). In Asia, A. tegmentosum has been used as a traditional medicine for treatment of various ailments. In general, the stem is used for treating traumatic bleeding, and the leaves and stem were used to treat liver diseases such as hepatitis, cirrhosis, liver cancer, leukemia, diabetes, and nephritis (Oh et al., 2017). In addition, leaf extract of A. tegmentosum has anticancer and antioxidant (Eo et al., 2020a). Phytochemical investigations have shown that these plants include five classes of major constituents, including flavonoids and phenethyl glycosides, phenol compounds, steroids and tannins (Hatano et al., 1990; Lee et al., 2017; Park et al., 2006; Song et al., 2014).

In this study, we aimed to analyze the correlation between bioactive compounds of A. tegmentosum and soil physico- chemical properties of cultivation regions.

In this study, a total of 57 samples of stem parts were collected from 19 cultivation located in 14 local provinces during October - November, 2019. The samples used in the study has identified the taxonomic identification of the research team and the confirmatory sample of the sample is being stored in the Forest Medicinal Resources Research Center (Fig. 1). 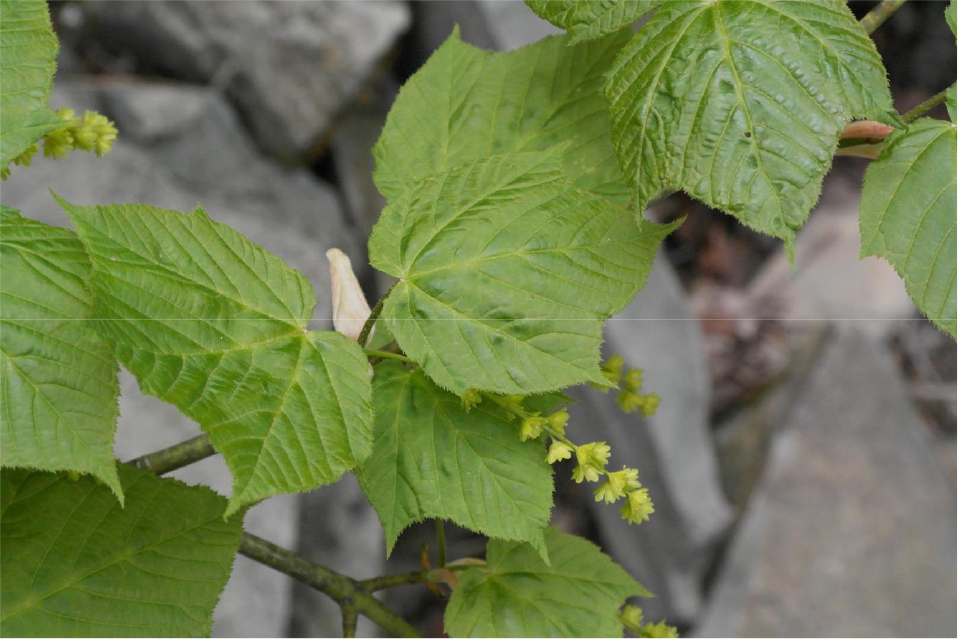 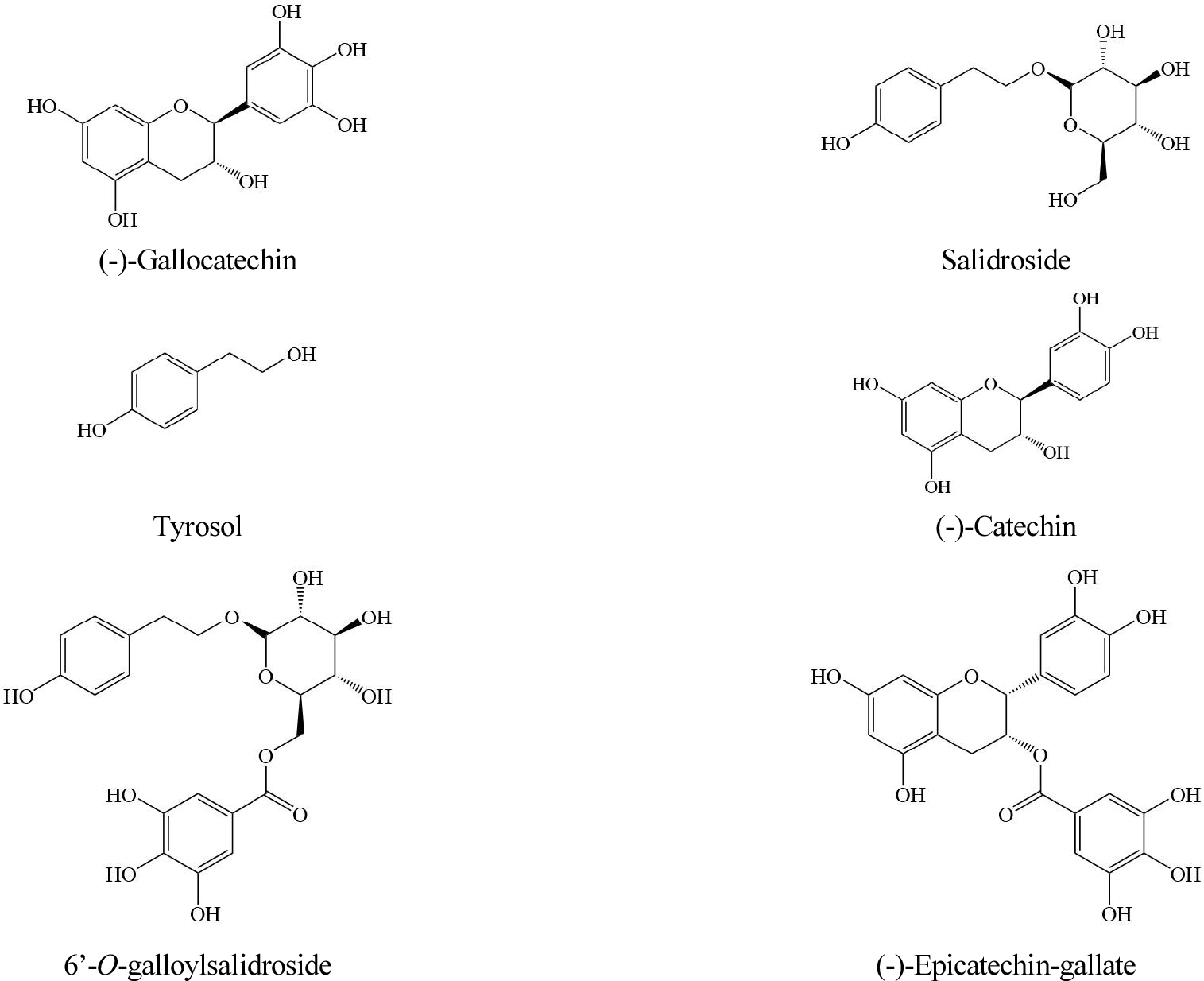 Chemical structure of six bioactive compounds in A. tegmentosum.

The collected samples were washed with distilled water and lyophilized. After measuring the dry weight of the sample, the powder was pulverized with a grinder and passed through a 80 mesh standard sieve and finally stored at -70℃ until further analysis. A sample of the powder was extracted with 100 ㎖ of 70% ethanol in an ultrasonic bath (JAC-5020, KODO, Korea) for 60 min at room temperature. After extraction, the samples were centrifuged (Labogene, BMS, Korea) at 3000 rpm for 5 min, and the supernatant was separated. The supernatant was filtered by 0.45 ㎛ membrane filter (Whatman co., Maidstone, UK).

Standards working solutions for HPLC were prepared by diluting the stock solutions in methanol to obtain concentration ranges of 31 - 500 ㎍/mL for six compounds.

Soil samples were collected from 19 different cultivation regions of A. tegmentosum in 3 replicates. Surface soil was removed and soil was collected at a depth within 20 ㎝. Soil physicochemical properties were analyzed according to standard protocols designed by RDA (Rural Development Administration, 2017). Soil texture of the sampled soil was confirmed using soil classification triangular chart given by the USDA (U.S. Department of Agriculture) with the ratio of sand, silt and clay measured using the pipette method. Soil pH and electrical conductivity (EC) were measured by adding 10 g of dried soil to 50 mL of distilled water and subsequently using a pH meter and an EC meter, respectively. The soil organic matter (OM) content was measured using the Tyurin method and the total nitrogen (TN) content was measured by the Kjeldahl sulfuric acid distillation method. Available phosphate (Avail. P2O5) was measured by molybdenum blue method using 1-amino-2-naphthol-4-sulfonic acid solution. After leaching dried soil sample in 1N NH4OAc (pH7.0), the exchangeable cation was measured using an inductively coupled plasma- optical emission spectrometry (ICP-OES) and the cation exchange capacity (CEC) of the exchanged ammonium was measured by Kjeldahl distillation method. Each sample was analyzed in triplicates and expressed as a mean value.

HPLC method was validated for linearity, LOD, LOQ, accuracy and precision. Linearity was examined with five different concentrations of the six bioactive compounds using calibration curves from the linear regression analysis. The bioactive compounds showed good linearity (r2 > 0.9996) within the tested range and LOD and LOQ values ranged from 0.21 to 1.65 ㎎/mL and 0.70 to 5.10 ㎎/mL, respectively (Table 1). Intra- and inter-day variations were selected to determine the precision and accuracy of the method. Precision values ranged from 0.14 to 1.50% and 0.13 to 1.15%, respectively and accuracy values ranged from 90.31 to 106.96% and 90.84 to 106.96%, respectively. As shown in Table 2, the overall precision and accuracy values were within acceptable ranges. The average recoveries of the six bioactive compounds were satisfactory, as all values were from 90.8 to 107.0% (data not shown).

The HPLC-UV method was applied to the 57 samples of A. tegmentosum. The six bioactive compounds were identified by comparing retention time and UV spectra chromatograms of the peaks with those of the standards in HPLC-UV chromatogram (Fig. 3). The analysis was performed in triplicate and the results are expressed as mean (Table 3). 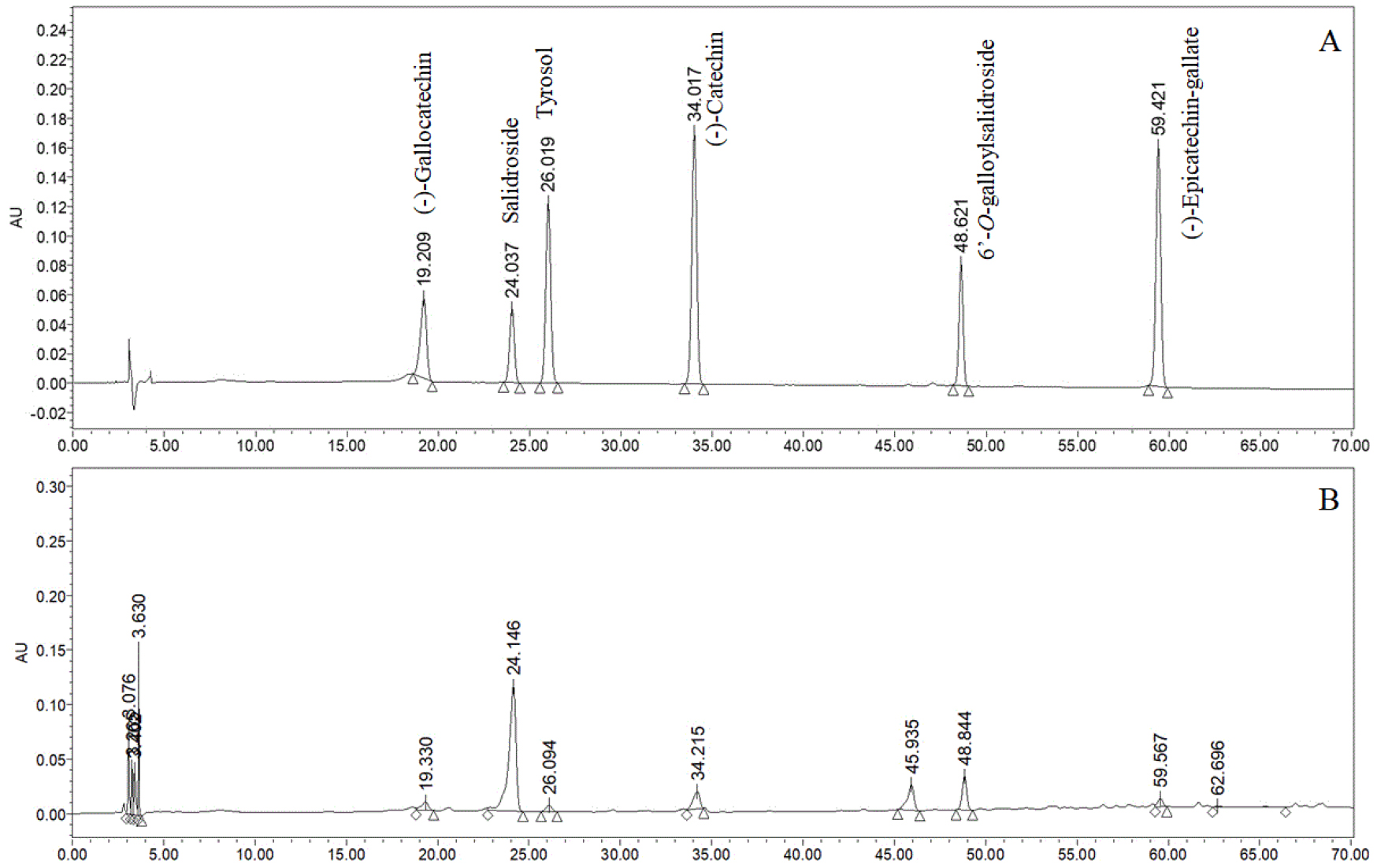 HPLC chromatograms of A. tegmentosum extracts; A: standard mixture; B: sample extract.

The samples contained (-)-gallocatechin from 0.04 to 0.43%, salidroside from 0.90 to 3.86%, tyrosol from 0.03 to 0.43%, (-)-catechin from 0.05 to 0.37%, 6’-O-galloylsalidroside from 0.02 to 0.31%, (-)-epicatechin-gallate from 0.01 to 0.04%. Among the six compounds, salidroside was present in the highest composition. (-)-Gallocatechin, salidroside, (-)-catechin and 6’-O-galloylsalidroside were commonly present in all cultivation regions, while tyrosol and (-)-epicatechin-gallate were not. According to the simultaneous analysis based on the three aerial parts of A. tegmentosum, it was reported that salidroside was mainly distributed (Lee et al., 2017). This study also confirmed that the result was consistent with previous study because on the high content of salidroside.

Correlation between soil properties and bioactive compounds of A. tegmentosum

Salidroside, main compound of A. tegmentosum is affected pH, exchangeable cation (Mg2+,Ca2+ and Na+) and available phosphate. Numerous research results have been reported that the pH value and exchangeable cations the soil affects the growth of plants and production of secondary metabolite (Kandimalla et al., 2020; Radić et al., 2016; Wink, 2008), and our result also confirmed that the pH value has the greatest correlation on the content of salidroside, the main compound. In addition, it has also been reported that available phosphate has a positive effect on the production of secondary metabolites (Setyawati et al., 2020).

Eo et al. (2020b) reported that the Mg2+ content, pH, and clay ratio had a high effect on the contents of morroniside and loganin, which are bioactive compounds of Cornus officinalis. Also, Kim et al. (2020) and Eo et al. (2021) reported the results on the correlation between growth of medicinal resources (Panax ginseng C.A. Meyer, Paeonia lactiflora Pall.) and the soil properties. Liang et al. (2021) was reported that available phosphate has a negative effect on the contents of tanshinone IIA in Salvia miltiorrhiza. Also, Tanshinone IIA was related to temperature, but salvianolic acid B was not. In addition, they said that these results are related to the biosynthetic pathway through which the synthesis of compounds takes place. Moreover, they said that these findings might provide helpful references for quality control of S. miltiorrhiza.

Since out current study analyzed only the correlation between soil properties and the contents of compounds, it is necessary to study the relationship with plant growth and biosynthetic pathways through future researches.

This work was supported by the research of National Institute of Forest Science (NIFoS) (Project No. FP0400-2017-03).