Whitening agents derived from natural sources which do not have side effects are sought after. Schizophragma hydrangeoides is an edible plant that grows wild on Jeju Island. We aimed to determine whether S. hydrangeoides extracts show anti-melanogenic activity. Here, we found that 70% ethanol extracts of S. hydrangeoides leaf suppressed α-melanocyte- stimulating hormone-induced melanogenesis in B16F10 mouse melanoma cells. This activity of anti-melanogenesis in B16F10 cells were investigated by determining melanin content and tyrosinase activity, and by performing western blotting. The 70% ethanol extract downregulated tyrosinase and tyrosinase-related protein 1. In addition, the n-hexane fraction of S. hydrangeoides leaf (HFSH) exhibited significant anti-melanogenic activity among the various solvent fractions tested without reducing the viability of B16F10 cells. Taken together, these results indicate that extracts from S. hydrangeoides leaf can influence cellular processes via modulation of tyrosinase activity. Hence, S. hydrangeoides can be used as a whitening agent in the cosmetic industry and as a therapeutic agent for treating hyperpigmentation disorders in the clinic.

Skin color is affected by the synthesis of the dark pigment eumelanin and the yellow-red pheomelanin by melanocytes; skin pigmentation correlates with eumelanin content (Swope et al., 2012). Melanin is synthesized by melanocytes in the basal layer of the epidermis, and at the appropriate level, it prevents UV irradiation-induced cellular damage in the skin (Ko and Cho, 2018). However, excessive melanin synthesis causes skin-cancer and hyperpigmentation disorders, including melasma, freckles, lentigo, and other hyperpigmentation syndromes (Park et al., 2021; Speeckaert et al., 2014).

Melanin biosynthesis in melanocytes is associated with several melanogenic factors including tyrosinase, tyrosinase- related protein-1 (TRP-1), dopachrome tautomerase, and microphthalmia-associated transcription factor (MITF) (Moon et al., 2012). Tyrosinase is the key enzyme in pigment synthesis and catalyzes the first two rate-limiting reactions of melanogenesis: (1) hydrolysis from the metabolic precursor of melanin, L-tyrosine to L-dihydroxyphenylalanine (L-DOPA), and (2) oxidation of L-DOPA to dopaquinone (del Marmol and Beerman, 1996). TRP-1 plays an important role in melanin modification. TRP-1 participates in the correct trafficking and stabilization of tyrosinase (Hearing, 2000).

α-Melanocyte-stimulating hormone (α-MSH) binds to melanocortin-1 receptor 1 (MC1R) and sequentially stimulates MITF expression (Beaumont et al., 2012). MITF regulates the expression of melanogenic enzyme proteins, including tyrosinase, TRP1, and TRP2, in addition to its role in the transport of melanosomes to the dendritic tips (Ko and Cho, 2018).

Schizophragma hydrangeoides, belonging to the Hydrangeaceae family, is the only species in the Schizophragma genus, and it only grows on Jeju Island and Ulleungdo Island in South Korea. There are no previous studies on the functional components of S. hydrangeoides. In addition, the effect of S. hydrangeoides extract on melanogenesis and the underlying molecular mechanisms remain unknown. Therefore, in this study, we examined the anti-melanogenesis activity of S. hydrangeoides leaf for the first time and its underlying molecular mechanisms in B16F10 cells to develop new, safe, and effective skin-whitening agents obtained from natural sources.

S. hydrangeoides leaf were collected from Jochenon-eup, Jeju-si, Jeju Island, South Korea in May 2021, and a voucher specimen was deposited at the Jeju Biodiversity Research Institute (Specimen No. JBRI-P21-001). First, S. hydrangeoides leaf was dried, pulverized, and then extracted with 70% aqueous ethanol for 24 h. After evaporating the ethanol extract, the extract was freeze-dried, and the crude extract was fractionated using n-hexane, ethyl acetate, n-butanol, and water.

Melanin content was determined using a modified version of a method described previously (Hosoi et al., 1985). Cells were treated with various concentrations of the samples in the absence or presence of α-MSH for 48 h. After harvesting the cells via centrifugation (15,000 rpm, 5 min), the pellets were dissolved in 1 N NaOH and 10% DMSO at 80℃ for 30 min, and the absorbance was measured at 475 ㎚ using a microplate reader.

Cell-originated tyrosinase activity assays were performed according to a slightly modified version of a previously described method (Moon et al., 2012). The cells were treated with various concentrations of extracts in α-MSH for 48 h. The cells were homogenized in cold radioimmunoprecipitation acid (RIPA) buffer and a protease inhibitor cocktail. The protein content was normalized using a BCA protein assay kit (Thermo Fisher Scientific) and then incubated with L-DOPA (2 mM) at 37℃ for 30 min. Tyrosinase activity was detected using a microplate reader at an absorbance of 490 ㎚.

Cells were treated with various concentrations of extracts and fractions in the absence or presence of α-MSH for 48 h. The cells were homogenized in cold RIPA buffer containing a protease inhibitor cocktail and then normalized using a BSA protein assay kit. The cell lysates were separated via 4 - 12% sodium dodecyl sulphate-polyacrylamide gel electrophoresis and then transferred onto a polyvinylidene difluoride membrane. Membranes were blocked with 5% skim milk. After incubating the membrane with primary antibodies, the membrane was probed using horseradish peroxidase-conjugated anti-mouse or anti-rabbit IgG secondary antibodies for 1 h. Specific proteins were detected using the Chemi-doc system (VILBER, Collégien, France).

Analysis of the n-hexane fraction of Schizophragma hydrangeoides leaf (HFSH) was performed using an Agilent 7890A GC (Palo Alto, CA, USA) equipped with an Agilent 5975C MSD. Separation was performed using an HP-5MS capillary column (30 m × 0.25 ㎜ i.d. × 0.25 μm f.t.; 19091S- 433; Agilent). The analytical conditions used were as previously reported by Shibula and Velavan with a slight modification (Shibula and Velavan, 2015). Initially, the oven temperature was 40℃, which was increased to 250℃ at 3℃/min and held at this temperature for 10 min. Helium was used as the carrier gas at a flow rate of 1 mL/min. One microliter of the prepared sample (100 μg/mL in methanol) was injected in a 10:1 split ratio mode. The temperatures of the injector, MS quadrupole, and ion source were set to 230℃, 200℃, and 250℃, respectively. MS full scan data were recorded over a range of m/z 50 - 550 and then processed using ChemStation software (Agilent). Identification of compounds was based on comparisons with phytol standards, mass spectra reported in literature, and NIST library data. For absolute quantification, major fragment ions with m/z 71, 57, and 123 were used in selective ionization mode (SIM), and the calibration curve was plotted in the range of 5 - 100 μg/mL.

All data analyses were subjected to analysis of variance using SPSS (SPSS Inc., Chicago, IL, USA). Data are reported as the mean±standard deviation. At least three independent experiments were performed for each experiment. Values of P < 0.05 or P < 0.01 were considered significant.

The inhibitory effects of S. hydrangeoides leaf 70% ethanol crude extract at concentrations of 25 - 100 μg/mL were evaluated against melanin production in α-MSH-induced B16F10 cells. The 70% ethanol extract inhibited melanin production (Fig. 1A). No toxicity was observed in B16F10 melanoma cells when the extract concentration reached 100 μg/mL (Fig. 1B). 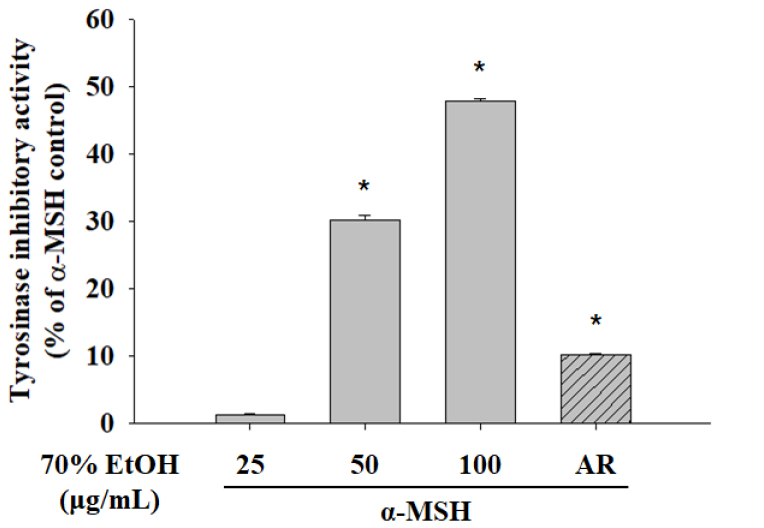 Effects of HFSH on melanin biosynthesis

The n-hexane, ethyl acetate, n-butanol, and water fractions from the S. hydrangeoides 70% EtOH extracts at non-toxic concentrations were investigated for their inhibitory activity on melanin biosynthesis. The HFSH showed the highest inhibitory activity against melanin production and was chosen for further analysis (Fig. 4A). HFSH treatment significantly suppressed melanin production in a concentration-dependent manner (Fig. 4B). Moreover, the anti-melanogenic effect of HFSH was superior to that of whitening agents, including arbutin (50 μg/mL). 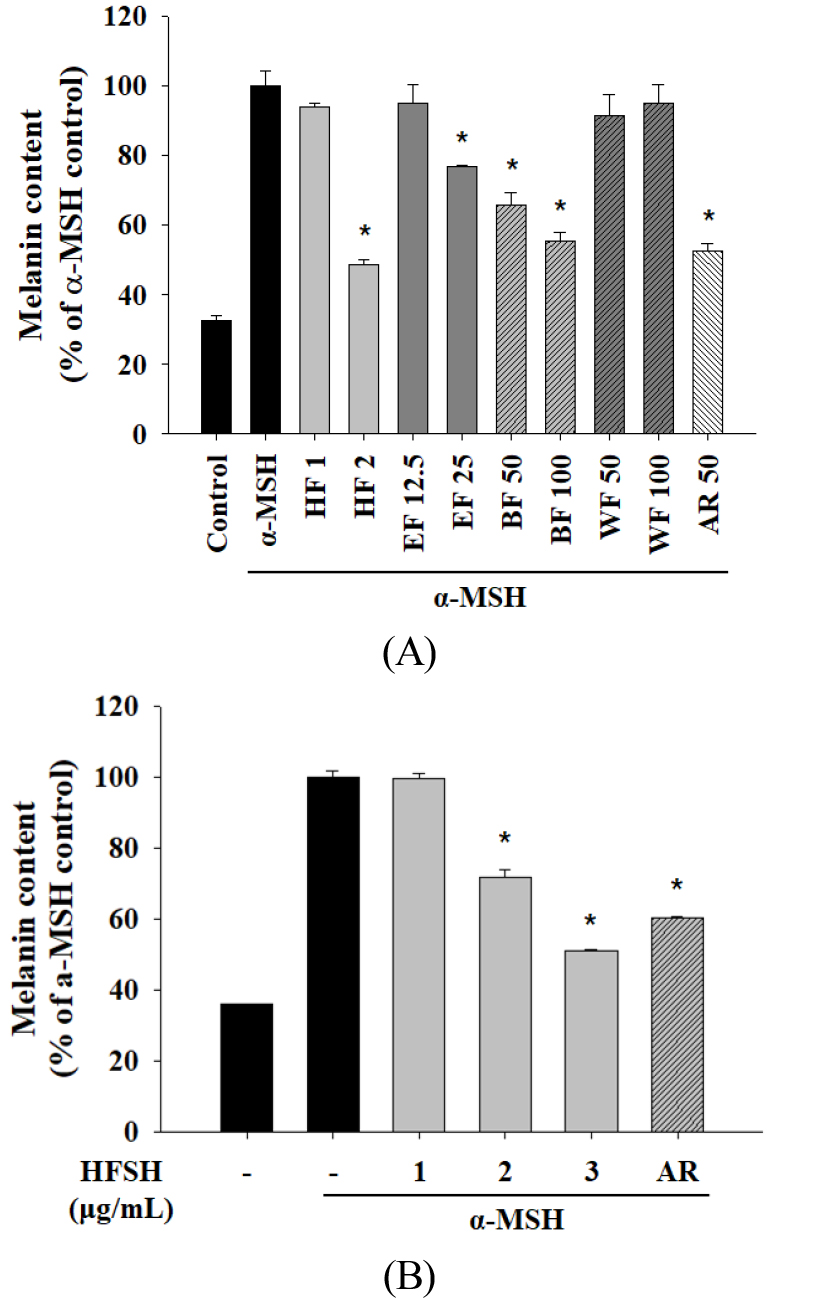 Effects of the HFSH on melanin content in B16F10 cells. (A) Melanin content was determined after treatment with indicated concentrations of the Schizophragma hydrangeoides leaf fractions or 50 μg/mL of AR. Cells were stimulated with α-MSH for 48 h. (B) Melanin content was examined after treatment with 1, 2, and 3 μg/mL of the HFSH or AR (50 μg/mL). Cells were stimulated with α-MSH for 48 h. Data are presented as the mean ± standard deviation. *P < 0.05 versus α-MSH (200 nM) control. HFSH, n-hexane fraction of Schizophragma hydrangeoides leaf; EF, ethyl acetate fraction; BF, n-butanol fraction; WF, water fraction; AR, arbutin; α-MSH, alpha-melanocyte-stimulating hormone.

Phytol is the major active constituent in HFSH

Since HFSH inhibited melanogenesis, we analyzed the chemical profiles of HFSH to identify the constituents responsible for anti-melanogenesis activity. GC-MS full scan analysis revealed that phytol was a major component of HFSH (Fig. 5A and B). The base peak of phytol was formed at m/z 71, and other fragment ions were detected at m/z 57, 81, and 123 (Fig. 5C and D). The quantification method was developed using the SIM method based on the mass spectrometric features of phytol. The calibration data of phytol showed that the R2 value was 0.994, indicating good linearity. The linear regression equation was y = 647x - 2682. The quantification results revealed that the phytol content was 260.38±12.88 mg/g in HFSH (Table 1). Phytol has already been reported to show anti-melanogenic activity (Ko and Cho, 2018), suggesting that the anti-melanogenic activity of HFSH was likely due to the presence of phytol.

RT, mass spectral data, and content of phytol in HFSH

yEach value is presented as the mean of three replications ± standard deviation.

Skin depigmentation agents available at present induce toxic and potentially carcinogenic side effects, penetration, and skin irritation; therefore, whitening agents derived from natural sources are sought after. There are no previous reports on the biological activity of S. hydrangeoides. Therefore, in this study, we investigated the anti-melanogenic effects of S. hydrangeoides leaf extract. We found that treatment with the 70% EtOH extract decreased the melanin content in cells. Furthermore, treatment with 70% EtOH extract suppressed the expression of tyrosinase and TRP-1, and reduced intracellular tyrosinase activity, but did not downregulate TRP-2. Transient transfection assays have shown that MITF isoforms regulate transcription of the TRP2 gene in a different manner from those of tyrosinaseand TRP1 genes (Shibahara et al., 2000).

In the process of melanin synthesis, tyrosinase initiates melanogenesis via the oxidation of tyrosine and then yields L-DOPA and dopaquinone as the final common precursors (Hsiao and Fisher, 2014). Furthermore, melanin synthesis requires TRP1 and TRP2, which catalyze specific steps in melanogenesis (Jiménez-Cervantes et al., 2001). Moreover, a strong intermolecular association between TRP1 and tyrosinase stabilizes tyrosinase (Jung et al., 2014). Tyrosinase plays a role in regulating general melanin synthesis as the first rate- limiting enzyme (Lee et al., 2011). Our data indicated that the intracellular tyrosinase inhibitory activity of the 70% EtOH extract was similar to that of arbutin, a positive control. When the cells were treated with 70% EtOH extract at 100 μg/mL, the intracellular tyrosinase inhibitory activity was similar to that of 50 μg/mL arbutin (Fig. 2). We found that treatment with n-hexane fractions decreased melanin content (Fig. 4B).

Notably, in this study, GC-MS analysis identified phytol as a major constituent of HFSH. Previous studies have reported that phytol inhibits melanin content and is used as a safe ingredient in cosmetic products such as fragrances, shampoos, toilet soaps, and other toiletries (Ko and Cho, 2018; McGinty et al., 2010). Therefore, HFSH itself may have potential as a whitening agent.

In conclusion, this study is the first to demonstrate that S. hydrangeoides leafs possess anti-melanogenic properties without exhibiting toxicity in B16F10 cells. The 70% EtOH extract decreased melanin content and intracellular tyrosinase activity by downregulating tyrosinase and TRP1. In addition, HFSH treatment reduced melanin content without causing cytotoxicity in B16F10 cells. Notably, phytol was identified as a major constituent of HFSH. Hence, S. hydrangeoides may be used as a whitening agent in cosmetics, food, and in the clinic for treating hyperpigmentation disorders.

This study was financially supported by the Ministry of Trade, Industry, and Energy and the Korea Institute for Advancement of Technology through the National Innovation Cluster R&D program (Research and Development of Jeju Raw Materials for Customized Cosmetics/Food: P0015361).

The authors declare that they have no conflicts of interest.