Cacti is a collective name for succulent plants belonging to the Cactaceae family of Caryophyllaes. In dry areas, during periods of heavy rainfall, water is stored in the plant body and used for plant growth during the dry season. Cactus has a reduced surface area to minimize water loss in arid regions, converting leaves to spines, and shortening stems and roots. Among the 3,000 species of succulent plants found worldwide, ~1,800 are cacti, which originated in South America and evolved in a dry environment (Anderson, 2001). Cactaceae are classified into four subfamilies by the International Cactaceae Systematics Group: Pereskoideae, Maihuenioideae, Opuntioideae, and Cactoideae (Nyffeler and Eggli, 2010). Opuntioideae is classified into seven genera: Brasiliopuntia, Tacinga, Consolea, Miqueliopuntia, Salmiopuntia, Opuntia and Tunilla (Wallace and Dickie, 2002; Griffith and Poter, 2009; Hernandez-Hernandez et al., 2011). In phylogenetic studies, it is classified into ten series: Brasiliopuntia, Tacinga, Elatae, Macbridei, Scheerianae, Humifusa, Macrocentra, Nopalea, Basilares and Microdasys (Table 1), (Majure et al., 2012b).

Classification of Opuntia s.s. based on phylogenetic studies (Majure et al., 2012b) 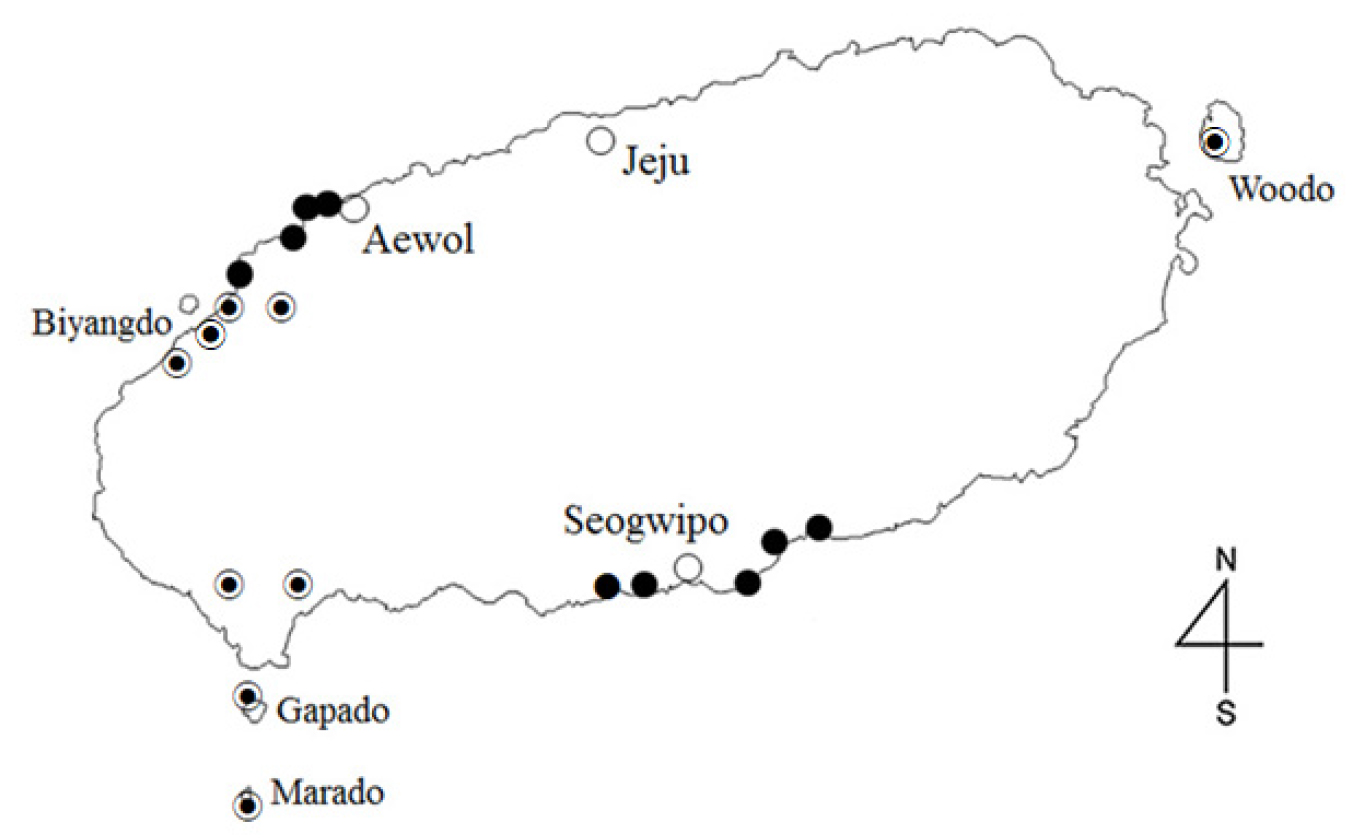 O. monacantha f. jejuensis is the largest indigenous cactus species in Korea and is found on Jeju Island in the Aewol, Taepyeong, and Bomok regions (Fig. 1). In previous studies, External morphological studies have differentiated O. monacantha f. jejuensis from O. stricta by renaming the misidentified O. stricta, cultivated in the Hallim area of Jeju, and examining the phylogenetic relationship between them (Yang et al., 2020; Yang and Oh, 2021). The taxonomic analysis of O. monacantha sensu lato and its synonymous species is shown in Table 2. O. vulgaris Mill. had been accepted as a synonym of O. monacantha or O. humifusa but was later accepted as O. ficus-indica (L.) Mill. (Leuenberger, 1993). O. archavaletae Speg. was classified as a subspecies based on its different characteristics (flower, fruit) of reproductive organs (O.monacantha subsp. archavaletae (Speg.) Guiggi.) (Guiggi, 2017). A variety of O. monacantha was named O. monacantha var. gracilior Salm-Dyck (Table 2).

The taxonomic history of O. monacantha

The O. monacantha sensu lato used in this study was collected from the Taepyeong-ro habitat in Seogwipo (33°14'40.6" N 126°32'38.0" E). We transferred the collected materials were transferred to the cultivation site of the Baiknyuncho Museum in Hogeun-dong, Seogwipo, Jeju Island, for morphological studies. An immersion specimen was created and stored in Baiknyuncho Museum along with the associated resource management number. For DNA sequencing, one-year-old leaves were collected considering the occurrence of bacteria and contamination levels, and the obtained material was washed with distilled water, frozen in liquid nitrogen, and stored at -80℃ to extract the DNA.

Genomic DNA was isolated using the CTAB method (Doyle and Doyle, 1990). The primers and protocol were designed using the plastid intergenic spacers atpB-rbcL, trnL-F, and psbJ-petA, which are suitable for plant taxonomy phylogenetic classification studies, chloroplast gene matK, and nuclear ribosomal gene ITS (Table 3). The polymerase chain reaction (PCR) cycling parameters involved initial denaturation was performed at 94℃ for 5 min. The thermal cycle consisted of denaturation at 94℃ for 30 s, annealing at 55℃ for 30 s, and extension at 72℃ for 1 min, and was repeated 35 times. We performed the final extension at 72℃ for 10 min.

Genomic DNA regions and primer sequences used in this study

After thoroughly confirming the DNA sequence of the target species, the sequences of the species were compared and analyzed from a molecular evolutionary perspective (Majure et al., 2012a,b). Three previously studied (Kim et al., 2014) cacti (O. humifusa, O. humifusa f. jeollaensis, and O. stricta) cultivated in Korea were sampled to obtain evolutionary data on O. monacantha f. jejuensis. Phylogenetic relationships were confirmed using the Tacinga series as outgroups using genetic information registered in the GenBank of the National Center for Biotechnology Information (Clegg, 1993; Soltis et al., 1998; Park et al., 2010), (Appendix 1). Comparative analysis was used to establish the exact position of O. monacantha f. jejuensis within the Elatae series and the form and DNA sequence of O. monacantha complex, including O. monacantha, O. monacantha subsp. arechavaletae, and O. monacantha f. jejuensis species (Appendix 2). BI and ML analyses were used to confirm the phylogenetic relationships between the species, and the programs MrBayes-3.2.5 (Ronquist et al., 2012) and PhyML 3.0 (Guindon et al., 2010) were used. The GTR+I+G (nst = 6, rates = invgamma) model, based on the main parameters affecting the substitution ratio in the DNA sequence, was used for BI analysis. Each of the five genes was analyzed using a random phylogenetic tree of 1×106 generations and 100 generations of Markov chains. In ML analysis, random samples were selected to duplicate the same number of characters as in the existing data set, repeated 10,000 times to form the same tree using PhyML 3.0 program, a phylogenetic tree, and bootstrap.

The investigated taxon had different morphological characteristics than other Opuntia spp. in Korea (Table 4). The cladodes of mature specimens of O. stricta, O. humifusa, and O. humifusa f. jeollaensis are ovate, but those of O. monacantha f. jejuensis were oblong. Furthermore, plant size, flowering period, fruit shape, and pulp color were significantly different. O. monacantha f. jejuensis is a tree-like plant that grows to a height of > 2 m, while other species are shrub-like plants that grow to a height of GTTCTAGCACCAGAAAGTCG 1 m. O. monacantha f. jejuensis fruits are plum-shaped, whereas those of other species are elongated pear-shaped. The fruit of the investigated taxon is purple-green, whereas those of the others are reddish-purple (Fig. 2). Finally, the pulp of the investigated taxon was yellow-green, whereas that of the other species was purple. 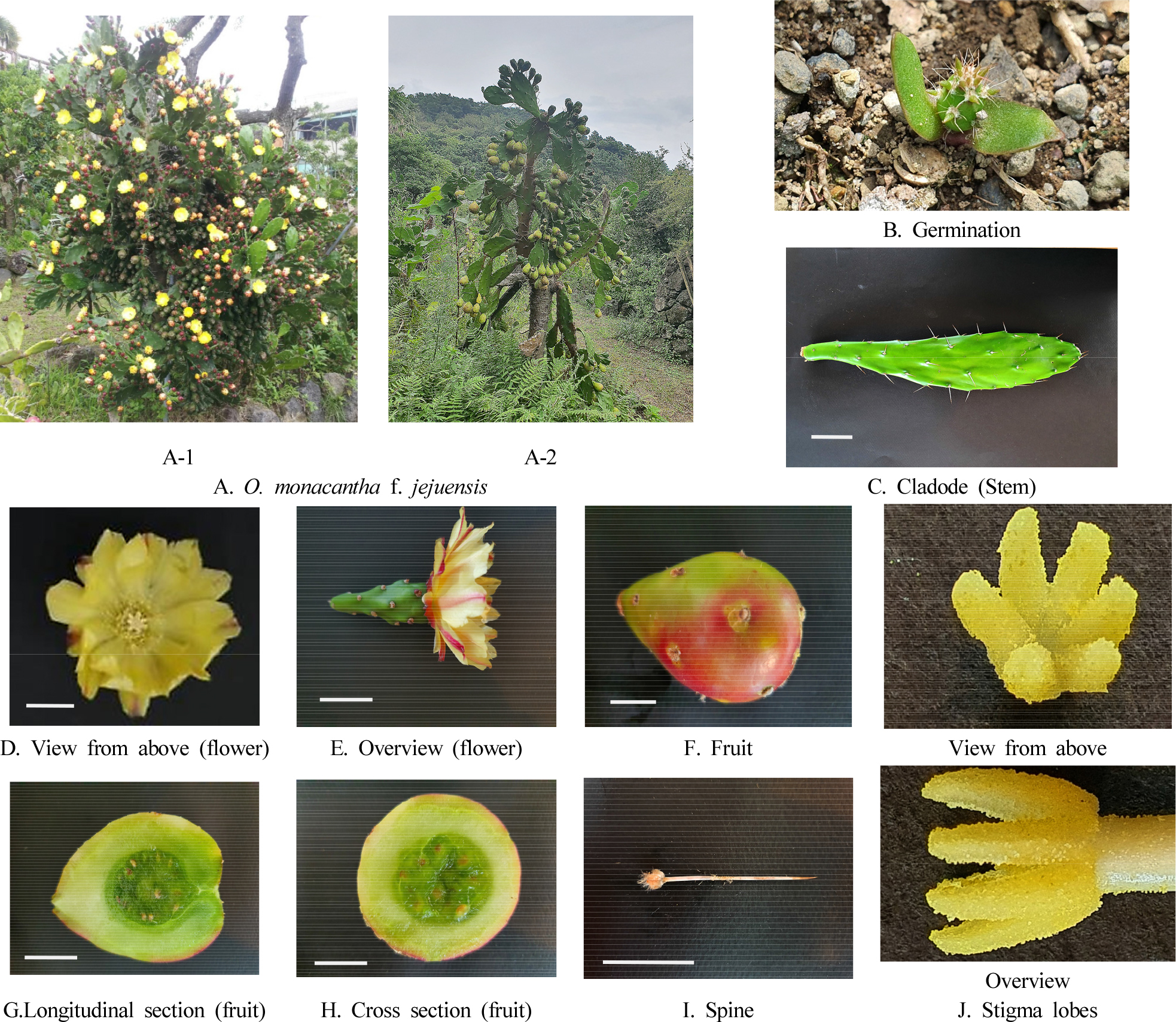 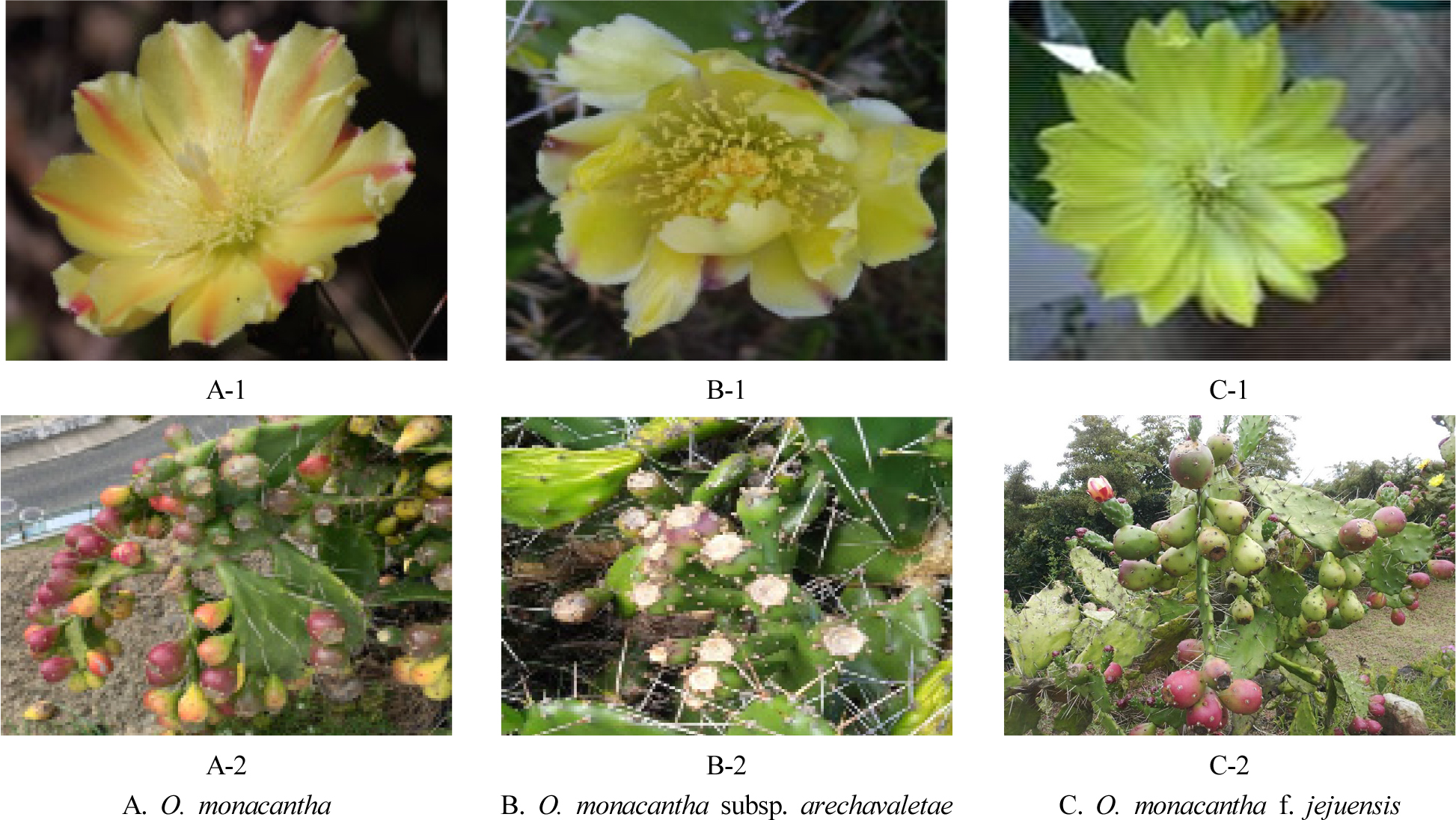 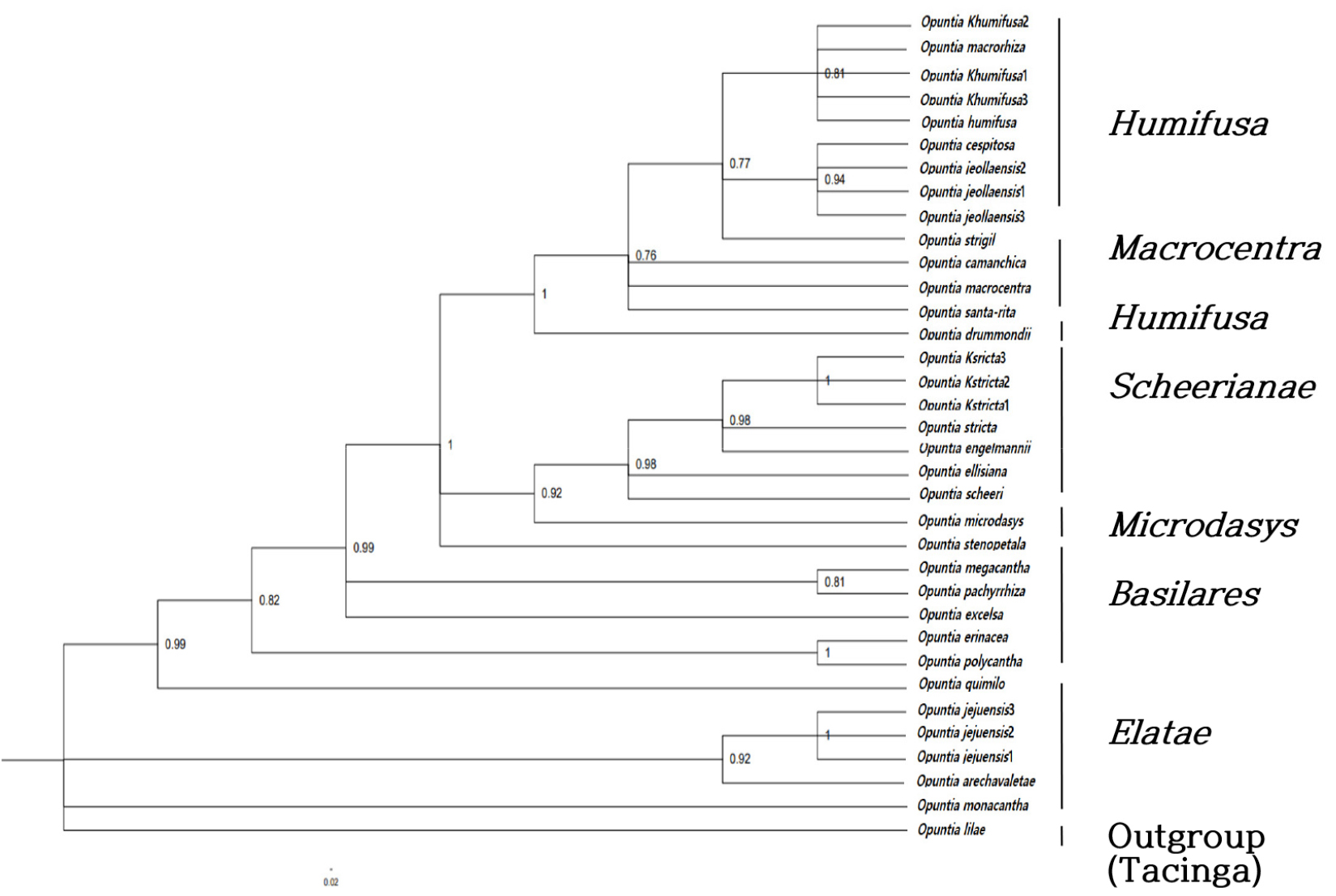 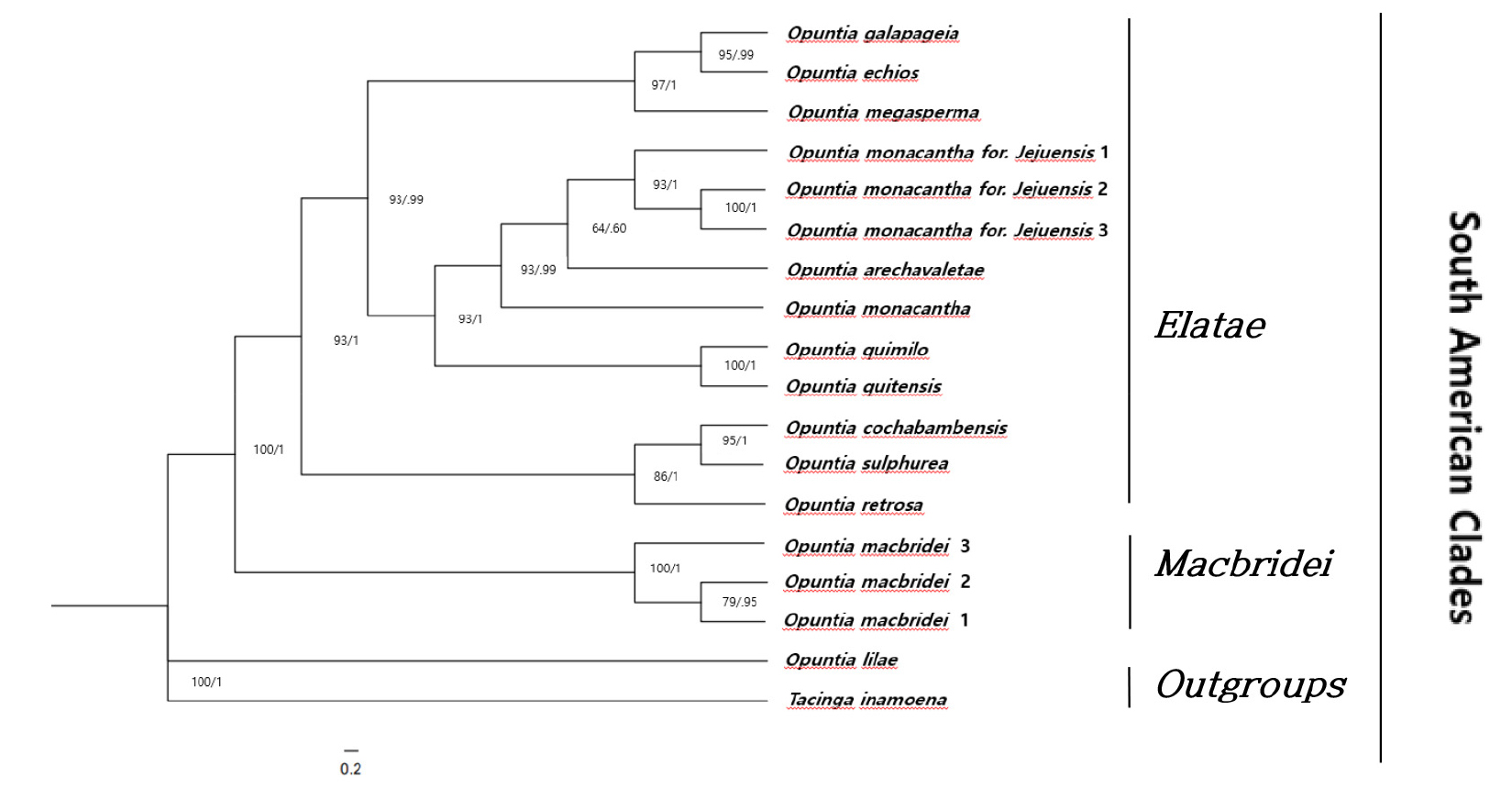 Bayesian and ML trees of South American clades including O. monacantha complex taxa (using atpB-rbcL, trnL-F, psbJ-petA, matK and nrITS sequences). BPP (right) and Bootstrap values (left) are shown between branches. South American clades used the names of the series published by Britton and Rose (1920), Engelmann (1856), and Majure et al. (2012a) as a result of their research. The BPP values are > 0.6 and The Bootstrap values are ≥ 60%.

Naming of a new forma 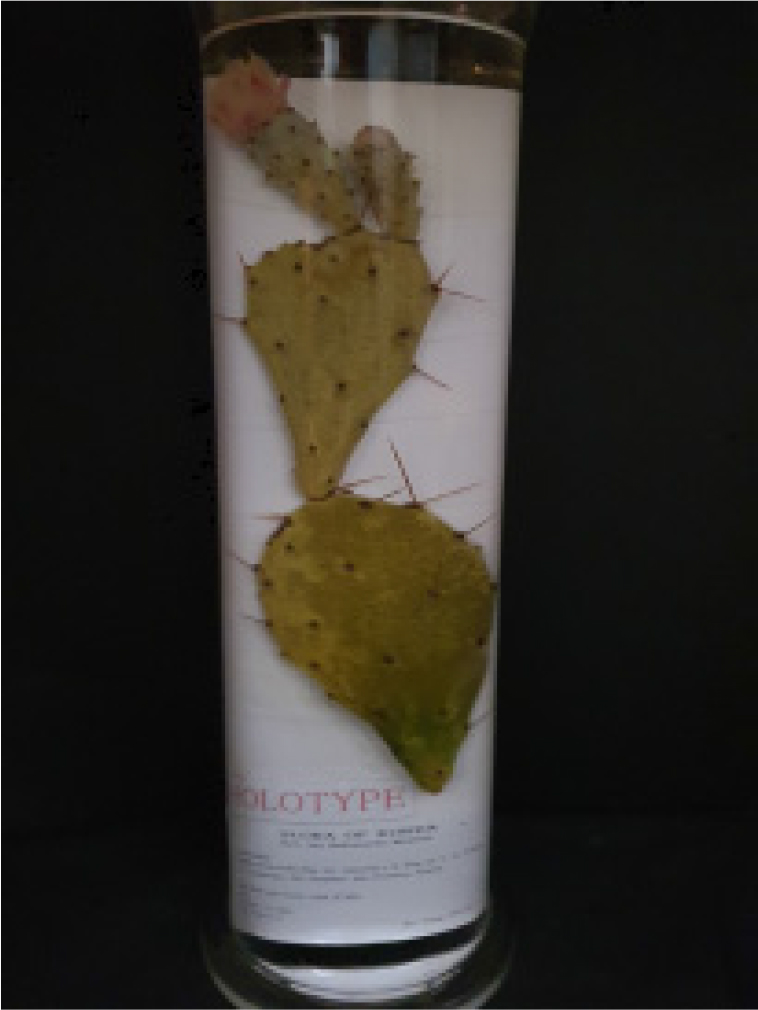 Etymology: The specific epithet was derived from Jeju Island, where this new taxon is located.

3b Red stripes on the outside of tepals O. monacantha f. jejuensis