Cryopreservation method using a droplet vitrification was applied to the thirty-one strawberry accessions of in vitro grown shoot tips. A protocol with 0.3 - 0.5 M preculture followed by C4 loading and B1 dehydration solutions efficiently implemented cryopreservation of twenty-six strawberry accessions. The highest regrowth rate was 85.8% for PHS0007 and others were ranged between 85.8% and 21.0%. A slightly modified protocol was applied to five accessions. With these two protocols, twenty-eight accessions obtained more than 40% regrowth rate. This study showed that the droplet vitrification method was able to practically implement cryopreservation of in vitro grown shoot tips of broad range of strawberry germplasm (105).

The cultivated strawberry (Fragaria x ananassa Duch.) is one of the most important crops in many countries. It is the most preferred berry fruit due to their pleasant aroma, color, taste, flavor and bioactive compounds (Agehara and Nunes, 2021). Since its economic value has been increased, the active breeding work produced many new cultivars from the different countries (Pinker et al., 2009). Many different techniques have been applied to maintain the germplasm of cultivars of Fragaria x ananassa and their wild relatives (Geibel, 2002). In order to handle increased numbers of germplasm, an efficient and stable preservation method has been investigated (Engelmann, 2004; Kim et al., 2009a; Yamamoto et al., 2012).

Cryopreservation has been broadly used as an efficient method for a long-term conservation for many types of plants especially vegetatively propagated plants in recent years (Coste el al., 2015). Because of its safe approach to the preservation of plant biodiversity from natural hazards and climate change on which the world is facing, cryopreservation has been practically used in many countries (Kaczmarczyk et al., 2011). The methods have been developed for numerous crops, woody, ornamental and medicinal plants using various plant materials such as shoot tips, meristems, embryos and pollens (Halmagyi and Delui, 2006). Since there are many factors are involved, protocols have been developed using plant-specific strategies depending on their sensitivities for dryness, chemical responses, physiology and each laboratory circumstances (Niino et al., 2003).

In Korea, more than 200 accessions of strawberry germplasm have been maintained in the field (Lee et al., 2020). In this study, we tested the cryopreservation methods using droplet-vitrification on in vitro grown shoot tips of thirty-one strawberry accessions originated in different places. The objective in this study was to determine if this droplet- vitrification protocol can be efficiently used for cryobanking system on a broad range of the germplasm of in vitro grown strawberries.

The strawberry accessions were introduced into the greenhouse in National agrobiodiversity center in Suwon, Korea in 2015 and 2016. Thirty-one accessions used in this study were bred in different countries such as Deutschland, England, Japan, Republic of Korea and USA (Table 1). The runner tips of 1 - 2 ㎝ were excised from the plants during the growing season in the greenhouse. The collected runner tips were sterilized by dipping in 70% ethanol followed by 1% sodium hypochlorite (NaOCl) for 10 min then rinsed with distilled water. In vitro plants were initiated from 1 - 2 ㎜ long shoot tips excised from the sterilized runner tips. The explants were cultured on shoot multiplication medium composed of Murashige and Skoog (MS) medium (Murashige and Skoog, 1962) supplemented with 0.2 ㎎/L 6-benzylaminopurine (BA), 30 g/L sucrose and 8.0 g/L plant agar (Duchefa Biochemie B.V., The Netherlands). The pH of the medium was adjusted to 5.8 before autoclaving at 121℃ for 15 min. All cultures were incubated at 24 ± 1℃ with a 16 h photoperiod under white fluorescent light (50 µmol/m2s). For cryopreservation experiments, the shoots were selected by uniform size and moved onto hormone free MS medium at the last subculture.

The cryopreservation protocols used were based on previous studies (Lee et al., 2019, 2020). Shoot tips of 1 ㎜ long were excised from 6 weeks old in vitro grown plantlets. There are two protocols were used in this study (Table 2). The explants were precultured in MS medium containing 0.3 M sucrose for 31 h, followed by 0.5 M or 0.7 M sucrose for 17 h. Precultured shoot tips were osmoprotected with a loading solution (LS, C4 or C6) for 40 min (Kim et al., 2009b). C4 solution was comprised with MS medium containing 35% of PVS3 (17.5% of glycerol + 17.5% of sucrose) and C6 was 40% of PVS3 (20% of glycerol + 20% of sucrose). The loaded shoot tips were exposed to a dehydration solution (B1) (Kim et al., 2009a) containing 100% of PVS3 (50% of glycerol + 50% of sucrose) for 60 min at 25℃. The shoot tips were transferred onto droplets containing 2.5 μL PVS3, which were placed on a sterilized aluminum foil strip (4.0 ㎝ × 0.5 ㎝, Fig. 1A), followed by direct immersion in LN. The shoot tips were removed from the LN after 30 min and transferred into 2 mL cryotubes filled with LN for cryostorage more than 1 h. Aluminum foils with shoot tips were removed from LN and immediately transferred into an unloading solution containing liquid MS with 0.8 M sucrose at 40℃ for 40 min.

Shoot regrowth rate was defined as percentage of direct shoot regeneration from the shoot tips. The survival rate was evaluated 2 weeks after thawing (Fig. 1B) and regrowth rate was assessed 8 weeks after thawing (Fig. 1C). Experiments were done with at least 10 shoot tips each of the three replications per treatment. When the shoot tips treated immersion in liquid nitrogen at least one hour as cryopreservation treatment that was described as +LN. All the treatments were same except freezing in liquid nitrogen so it was considered as treated control and described as -LN. The results were presented as means with standard error (SE).

It is important for a genebank to find a protocol applicable to a broad range of the genotypes to make its work efficient even though it can be necessary to slightly modify the protocol for some genetically and physiologically different from the most of the varieties in a species. We have tested two protocols (Table 2) using droplet-vitrification with slight modifications of previous studies (Lee et al., 2019, 2020). Thirty-one accessions bred in different countries were used (Table 1). Fig. 2 presents the regrowth rates of twenty-six accessions after cryopreservation treated by protocol 1. The results showed that the average of the total regrowth rates of twenty-six accessions was 61.5%. The highest regrowth rate was 85.8% for PHS0007 and others were ranged between 85.8% and 21.0%. Ten accessions obtained more than 70% regrowth rates. Most of the accessions except two, obtained more than 40% regrowth rates. This result indicated that this protocol 1 can be used for cryobanking on a broad genetic background of strawberries. In order to obtain these reasonable regrowth rates of many genotypes, accumulated knowledge and skills are necessary. Previous studies in strawberry have been focused to find the conditions of concentrations and exposure time to preculture since preconditioning to increase the dehydration tolerance of shoot tips was the most important factor for a successful cryopreservation by vitrification (Kaczmarczyk et al., 2011; Kim et al., 2009a). In strawberry, 0.1 M - 1.0 M sucrose concentrations were tested for preculture and suggested that the lower or higher concentrations reduced the regrowth rates after cryopreservation (Halmagyi and Deliu, 2006; Lee et al., 2019, 2020; Niino et al., 2003; Pinker et al., 2009; Yamamoto et al. 2012). Lee et al. (2019) found that preculture in 0.3 M for 40 h at 25℃ gave the highest regrowth rate in ‘Wonkyo3114’ and ‘Gurumi40’ of strawberry cultivars. In contrast, two step increase of sucrose concentration in the preculture with 0.3 M for 30 h followed by 0.5 M for 16 h obtained highest regrowth rates in two tested strawberry accessions ‘Massey’ and ‘MDU3816’ (Lee et al., 2020). In addition, two step increase of sucrose from 0.3 M to 0.5 M obtained best regrowth rates in chrysanthemum study (Yi et al., 2018). This preculture solution of two step increased sucrose was applied in our study and effectively implemented. 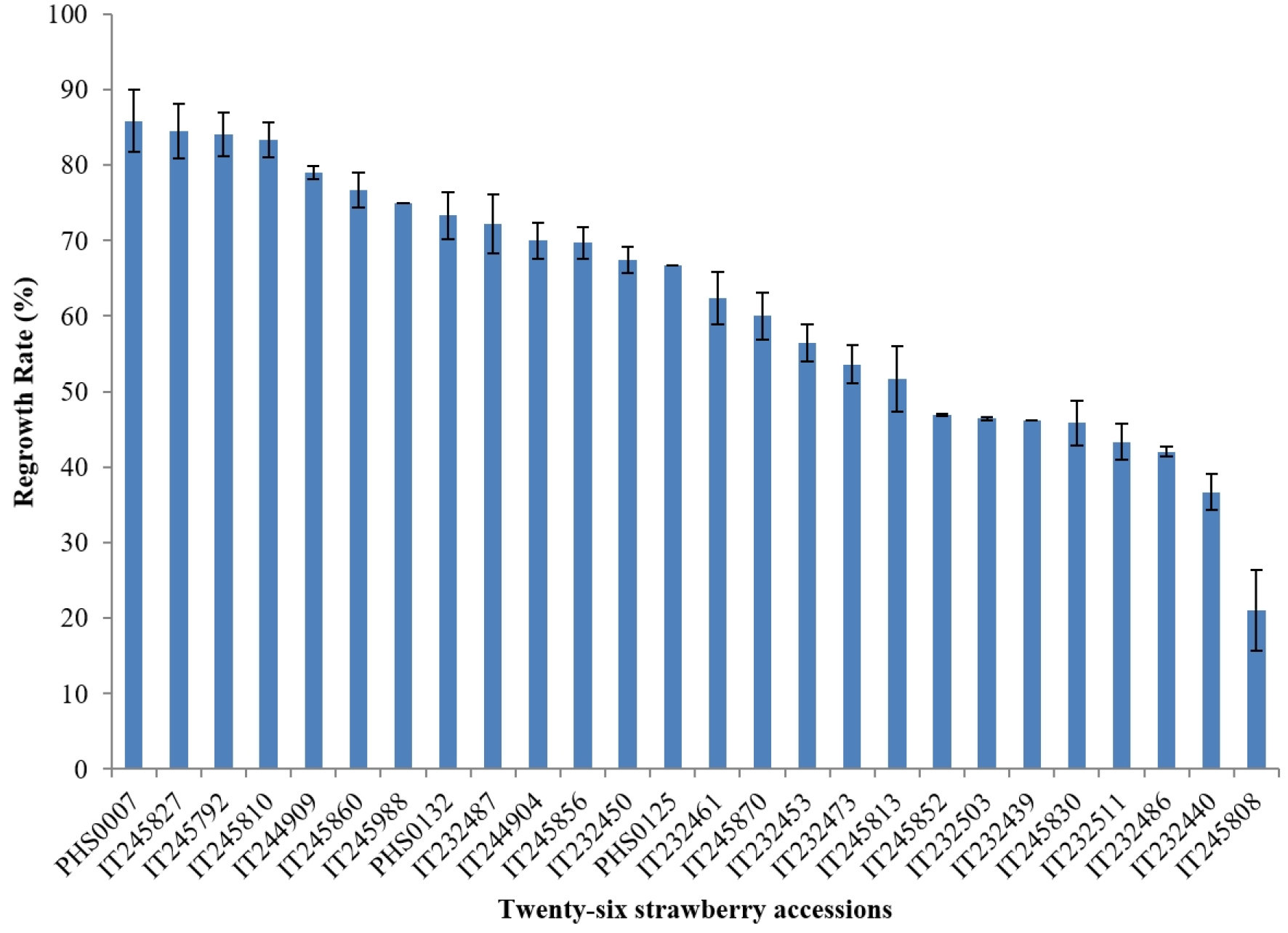 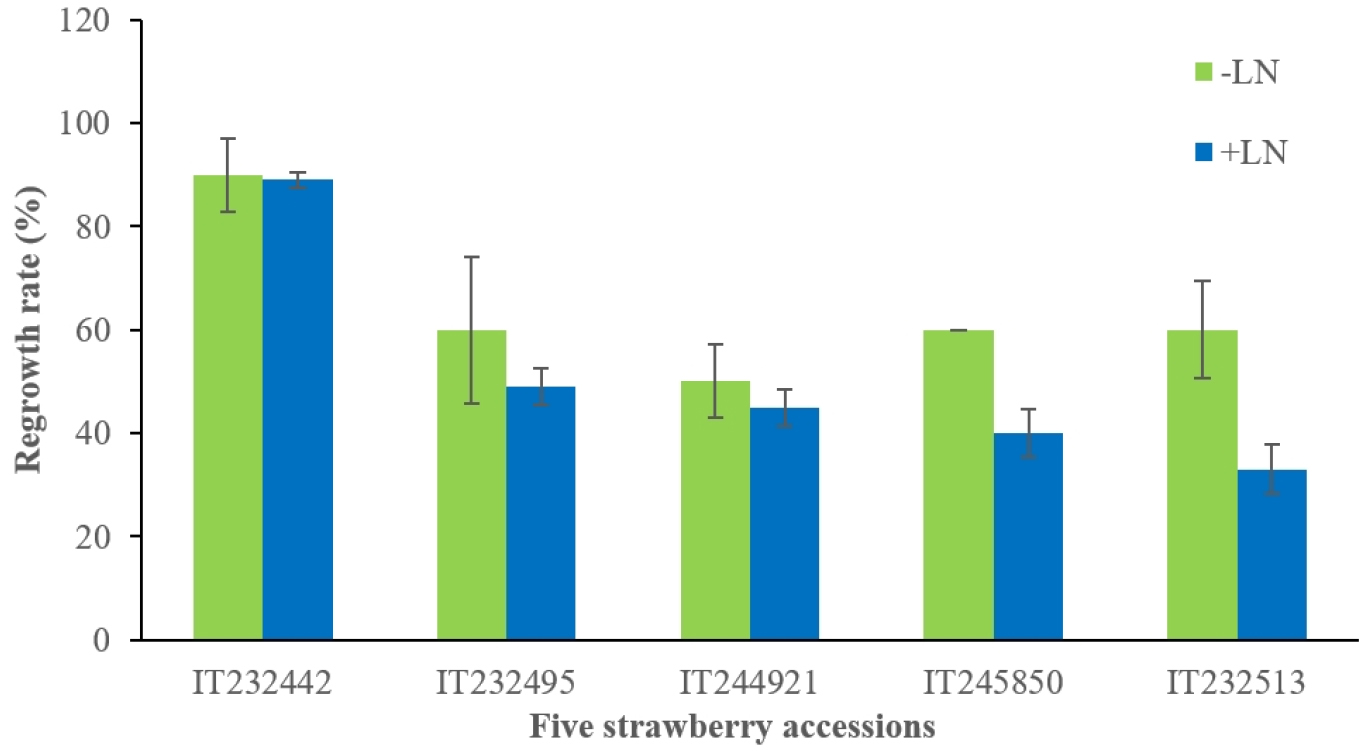 Loading solution is another major factor for successful cryopreservation. PVS2 is the most widely used for loading solution for many species (Sakai and Engelmann, 2007). However, toxic chemicals made limited applications only for a small size of explants. Kim et al. (2009a) introduced different concentrations of PVS3 solutions and applied them to garlic and chrysanthemum. Loading treatment with PVS3 increased survival and regrowth rates on both materials. In strawberry, Lee et al. (2020) reported successful use of two step treatments of PVS3 which are 35% PVS3 (C4) for loading solution and 80% PVS3 (B5) for dehydration solution. The study also presented that 40 min of each treatments gave the best regrowth rates. In our study, we also used 35% PVS3 (C4) and 40% PVS3 (C6) for loading solutions but we used 100% PVS3 (B1) for dehydration solution to prevent crystallization in broad range of strawberry germplasm.

There are several factors involved to enhance regrowth rates by doing cryopreservation in addition to preconditioning and loading. Many studies focus on defining physiological conditions of materials to be cryopreserved such as growth stage and also post-thaw medium as the key factors (Kim et al., 2006; Panis and Lambardi, 2006; Kaczmarczyk et al., 2011). In this study, the shoot tips were taken from the uniform size of the mother plants grown in 6 weeks after the last subculture as previous studies on strawberry. It has the advantages not only easy to multiply and manipulate but also less prone to somaclonal variation than non-organized tissues like calli and cell suspensions (Panis and Lambardi, 2006).

Post culture medium also plays an important role in shoot tip regeneration. Studies have tried identified crucial conditions for post thaw cultures. Lee et al. (2021) reported that post- cryopreservation regeneration significantly improved up to 73% by incubation of cryopreserved shoot tips on ammonium free medium followed by GA3 containing medium and then medium without growth regulators. Similar results have been produced with most of the species indicating that the ammonium has the critical effects for regeneration of cryopreserved shoot tips on post culture (Choi et al., 2019; Decruse and Seeni, 2002; Yi et al., 2016). Studies also reported that the presence of phytohormones resulted in increased numbers of survival or regrowth rates even though the types and concentrations of the hormones are various according to the varieties and species (Lee et al., 2019; Niino et al., 2003; Yi et al., 2018). Kaczmarczyk et al. (2011) reviewed potato studies of cryopreservation. Based on the results of the studies, higher concentrations and two or three combinations of phytohormones were applied in the first weeks of the regeneration phase. Then the lower levels of only GA3 or no phytohormones were supplied during the following week to avoid callus formation. Lee et al. (2019, 2020) showed that the best regrowth rates of ‘Wonkyo3114’ and ‘Gurumi40’ cultivars in the study was obtained by using NH4NO3-free MS medium containing 3% sucrose, 1.0 g/L casein, 1.0 ㎎/L GA3 and 0.5 ㎎/L BA. In this study, we used same composition of the media as Lee et al. (2019) suggested in the first weeks of the post culture. The following week, explants were transferred to the MS medium supplemented with 3% sucrose, 1.0 g/L casein, 0.5 ㎎/L GA3 and followed by hormone free medium. In addition, Niino et al. (2003) reported that PVP (polyvinyl pyrrolidone) and BA supplementation in the recovery medium increased the survival rate on strawberry and suggested that PVP may adsorb the phenolics produced by dead cells. We observed that cryopreserved explants of strawberry produced phenolic compounds right after transferred onto the post culture medium. We replaced the culture medium the next day with a fresh one instead of adding PVP in the medium to eliminate the phenolic compounds in vitro culture.

Based on previous studies, the protocol was developed on strawberry gemplasm. This study showed that the droplet vitrification method was able to practically carry out cryopreservation of in vitro grown shoot tips of broad range of strawberry germplasm.

This study was carried out with the support of “Development and application of cryopreservation technique for strawberry and Lilium germplasm and quality management for seed base collection (Project No. PJ014294)”, National Institute of Agricultural Sciences, Rural Development Administration, Republic of Korea.